A woman, Giulietta (director Federico Fellini’s wife, Giulietta Masina), suspects her husband Giorgio (Mario Pisu) is having an affair, as he forgets their anniversary, takes her successful, attractive friends to events and says the names of other women in his sleep. Instead of confronting him, Giulietta begins to experience more of life with the help of her more sexually adventurous neighbour (Sandra Milo). 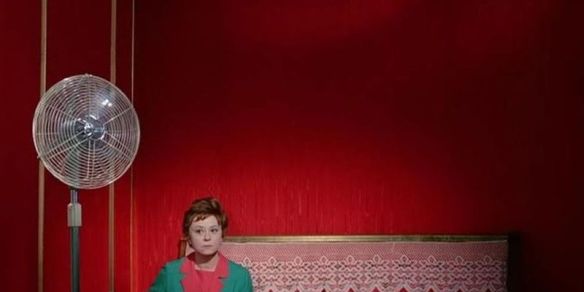 I don’t even know where to begin with this film, other than by saying I really didn’t like it. It doesn’t seem to be about anything! There’s a woman who gets buffeted around by her friends and family, has a few dream sequences, apparently experiences some spiritual nonsense and visits her neighbour’s sex palace, which looks like the Rocky Horror mansion through a kaleidoscope, all while everyone wears some very bizarre outfits. Her neighbour, for example, tends to dress like a slutty orchid. It’s not in the least bit my sort of film, and it’s also my first Fellini, of which there are numerous on the List and I’m not looking forward to any.

All the characters are either horrible people or too passive and bland to remember. There’s a sculptress who wants to have sex with God. Another woman thinks appropriate conversation includes saying how much you want to roll around naked on your host’s lawn to best experience the dew. There’s an outing to some kind of spiritual healer that involves a description of how an apple isn’t actually an apple, but it is an apple, it’s just also Buddha. And if you cut off someone’s head it would open the gates to Hell, but not doing it means the gates of Paradise are open instead. And there are specific noises you should make during sex, which include “Fut,” “Put,” “Plat,” and “Hin.” What is this crap? I mean really, what am I doing here?

I can only assume this is one of those waste-of-my-time inclusions on the 1001 List that are here to pay tribute to a supposedly legendary director, but in reality just look a bit pretty. There’s some good use of colour and some innovatively designed outfits and locations, but why couldn’t they have been used in a film that actually went somewhere and meant something instead of his drivel?

3 thoughts on “Juliet of the Spirits”