A magician known as the African Sorcerer conjures up a flying horse, which he refuses to sell for anything other than the Caliph’s daughter, Princess Dinarsade. Disgusted at the notion, Dinarsade’s brother Prince Achmed is convinced by the Sorcerer to ride the horse, but he is only shown how to make it fly up – pulling the lever at the horse’s head – but not how to make it come down – a similar lever at the tail. The Prince flies ever higher, unable to control the horse, until he eventually descends in a strange land, and that’s only where his adventures begin.

The Adventures of Prince Achmed is, to my knowledge, the oldest surviving animated film of feature length, with a couple of older ones having been lost in the past. The style of animation is stop-motion, and it is entirely made of silhouettes – cardboard cut-outs and thin sheets of lead in some places. Papercuts have become quite popular recently with the likes of Rob Ryan doing quite well off them, and it’s a style of artwork I’m very fond of. Sat at my desk I’m looking at a papercut I received for Christmas of AT-ATs trekking across Hoth, and I love it dearly. Thus I was more than happy to watch this film and witness the all the glorious imagery. 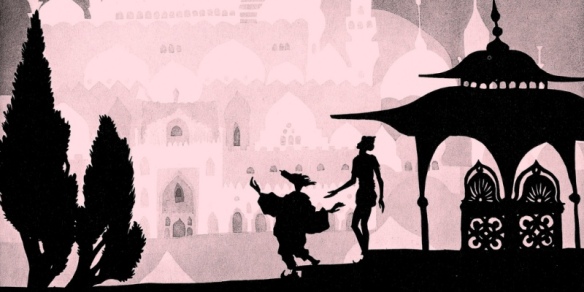 It really does look great, and often it’s amazing how much can be expressed purely through silhouette. The characters are so distinctly realised that it’s possible to garner their very emotions based on their outline and movements, with minimal facial detail. The design of the characters plays into this, with people like the Sorcerer having limbs that seem to flail at disconcerting angles, adding to his demonic appearance. The cuts are extremely intricate and detailed too. Having tried papercutting in the past with mixed results, this must have been an arduous and time-consuming process, but it definitely pays off.

Plot-wise there are a lot of recognisable elements to the story, whose ever-changing nature reminds me of a bed-time story being improvised as it goes along. Disney clearly took a great deal of inspiration from Prince Achmed, with Hercules, Aladdin and The Sword In The Stone being the most heavily influenced, but that’s fine. The climactic sequence, involving a giant battle between two forces with many fighters on each side became a bit muddled, with just too much going on to know what to pay attention to, but it felt like something of this scale was necessary after all the build-up, it was just a little too much for me.

That being said everything else was a lot of fun. Some of it is just plain nonsense – there’s a female ruler called Peri Banu who can kind of transform into a bird, but only when she has her magic headress, and later Prince Achmed must fight a giant snake in a pit, which he is somehow able to kill just as its tail wraps around something out of the pit so he can escape, but far worse has been done in mdoern animation and I’ve allowed that. Oh, and there’s a harem, full of women desperate for Achmed’s attention. Can’t say I was expecting that in this film.

5 thoughts on “The Adventures of Prince Achmed”