When King Richard is taken captive in Europe in 1191, his villainous brother Prince John usurps the throne, raising taxes dramatically and forcing many of his subjects into poverty. Enter Sir Robin of Locksley (Errol Flynn), the self-proclaimed greatest archer in the land, who amasses an army of townsfolk and loyal followers, with the intention of righting Prince John’s misdeeds, and winning the heart of Lady Marian (Olivia DeHavilland), who is to be wed to John’s right hand man, Sir Guy of Gisbourne (Basil Rathbone). 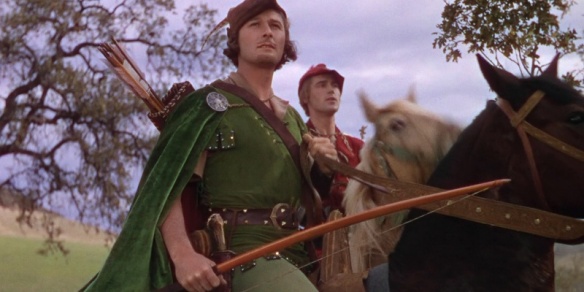 Recently we recorded a Lambcast episode devoted to the various adaptations of Robin Hood, primarily looking at 1991’s Robin Hood: Prince of Thieves starring Kevin Costner, 2010’s Robin Hood starring Russell Crowe and this one, from 1938. This being a Blind Spot pick for me this year was the main reason behind staging the show, and whilst I still kind-of-enjoyed the ’91 version and was very disappointed and confused by the mess that is Ridley Scott’s 2010 edition, I was utterly delighted with this one. At around 100 minutes long it is by far the shortest of these adaptations, and easily the most fun, with most of those minutes whizzing by in a flurry of swordplay and bravado.

Flynn is a devilishly charming rogue who I initially found too brazen and overly confident – after an altercation in the forest when one of Robin’s men shoots a stag belonging to the King, Gisbourne and company discuss Robin’s impending arrest and hanging at dinner only for Robin to show up, dump the dead beast upon the Prince’s table and sits down to enjoy a hearty meal – but Flynn plays him with such a light, suave touch that it’s impossible to stay mad. Also, his Robin Hood has his fair share of embarrassments too, most memorably when he first encounters the irascible Friar Tuck (Eugene Pallette). 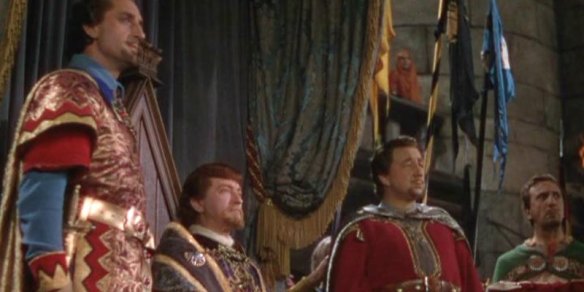 In fact, everyone in the cast is tremendous fun to watch. Basil Rathbone gives good menace as the only man able to take on Robin in a swordfight, whilst Melville Cooper as the Sheriff of Nottingham was a particular highlight for me, cowardly hiding and pretending to fight or be held back whenever the opportunity arose. He reminded me a great deal of Bert Lahr as the |Cowardly Lion in The Wizard of Oz. I found Olivia DeHavilland a little bland as Maid Marian, but I think that’s more the character than anything else, as there isn’t a lot of depth to her, and her scenes are generally stolen by her handmaiden, Una O’Connor. 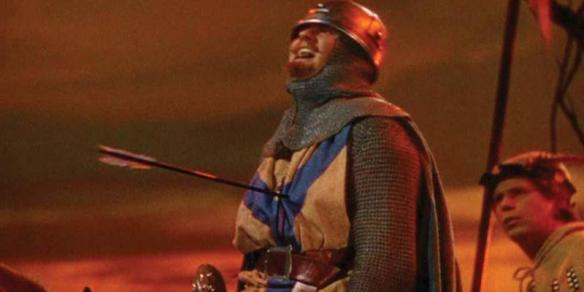 Compared to those other Robin Hood movies this one does feel very stagey, especially on the interior scenes. The costumes are also far too vibrant to be even slightly plausible for the era and living conditions, and a great many people have a tendency to die in an overly dramatic way after being shot right in the centre of their chest or back, where padding could be conveniently hidden, but I found all this added to the charm of the film and my overall enjoyment. I didn’t mind the use of sets at all, mainly because they used every square inch of them. The fights that break out inside Prince John’s castle are phenomenally entertaining, and the swordfight between Robin and Guy is possibly my favourite this side of The Princess Bride, and I giggled like a child every time a character used the age-old pick-up-something-heavy-and-throw-it-at-the-enemy attack. Also, the moment Robin cut a rope and rode it up and over a wall was some Keaton-esque stunt work that I loved every second of.

All in all, I thoroughly enjoyed this film. It vies with the animated Disney version (which this film heavily influenced, down to how some of the characters speak) as being my favourite Robin Hood adaptation. Well worth your time.

9 thoughts on “The Adventures of Robin Hood”