In the First World War, British Lt. T. E. Lawrence (Peter O’Toole) is selected to assess the situation of Prince Faisal (Alec Guinness), who is having issues with the Turks. Going against the wishes of his superior officer, Lawrence catches the attention of the Prince, and advises a plan to attack Aqaba, a strategically positioned shipping port, by land, something deemed impossible due to the treacherous desert that must be crossed to do so. Even so, Lawrence and 50 men set out to do just that.

When Lawrence of Arabia was voted to be one of my Blind Spot movies for this year I knew it would be the trickiest one to complete, what with it being over three hours long. All praise the glory of Bank Holiday weekends then, for providing that extra day wherein a sunny afternoon can justifiably be spent indoors watching an epic of this stature. Granted I couldn’t watch it all in one sitting – what would a bank holiday be without a spot of gardening? – but given this is a two-discer with an intermission in place, I think a more relaxed approach to the run-time is acceptable.

I’d seen tid-bits of the film before, possibly even the entire first half on a not-really-paying-attention basis, but I’d definitely never seen beyond the interval, so as far as I’m concerned it still counts for a Blind Spot, especially given all I could remember was the iconic shot of Omar Sharif emerging in the far distance of the desert horizon, this dark grey smudge slowly becoming a humanoid figure atop a horse. It’s this level of cinematography that earns the MVP spot for the film, making grand use of the magnificent desert vistas, doing their best to diminish the size of the riders attempting to cross them. There are multiple shots where so much of the screen is dedicated to empty, barren sand,m with these ant-sized horses crawling slowly across the very bottom of the screen.

There’s a scale to Lawrence of Arabia the likes of which we rarely see today, with the sequence at the end of the desert trek being a particular standout, requiring hundreds of actors and extras, many on camels or horses, in one gigantic shot that must be seen to be believed. Yet it is the smaller moments that stuck with me more. For example, mild spoiler alert, during the desert trek, on the final and most difficult stretch where riding must be undertaken day and night or else they’ll all perish from dehydration, one of the riders walls from his camel, unbeknownst to anyone else. It is not until some hours later when his empty camel is noticed. Sharif’s Sherif Ali insists going back will be suicide, but Lawrence does anyway, and successfully rescues the man, barely surviving himself in the process. Later, there are ramifications for Lawrence saving this man, and these character moments are the most interesting in the film. If anything, and I’m surprised to be thinking this given how long the film runs already, but I’d have liked a little more time spent on these scenes, to greater see the emotional impact they have on Lawrence.

O’Toole does a fine job in one of his earliest roles, one that he was by no means the first choice for, but wound up being perfect. Some of his latter emotional changes occur a little too suddenly, but if anything that’s more to blame on the brisk and hurried nature of the finale than O’Toole’s performance, as throughout he maintains an air of otherness to those around him, in a way that reminded me of Andy Dufresne’s slight smile as he wanders around Shawshank, an essence of superiority about him, whilst still understanding he is somewhere alien to all else he has known previously. Elsewhere the cast is comprised of character actors of the day all doing great jobs, despite a little white-washing that can be overlooked as being a sign of the era rather than anything malicious. If it means Alec Guinness is in a film, then I’m not going to complain all that much about it. 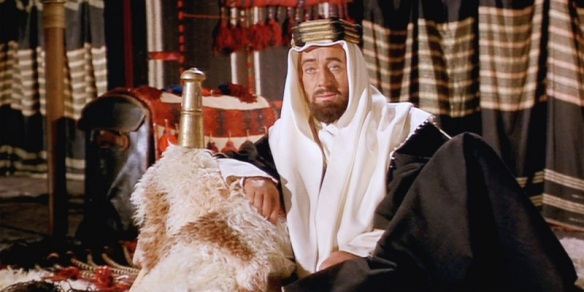 Overall it is a little long, yes, and I greatly preferred the first half, chronicling Lawrence’s rise and the challenges he overcame to become the legend he’d live to regret in the last hour, which at times became too bogged down in politics. I almost wish it had stopped at the halfway mark, as with a few tweaks here and there it would have made a perfectly great 135-minute standalone piece that I’d be more willing to watch again sooner. As it is, with that extra hour-and-a-half on the end, covering rather more sombre elements of Lawrence’s story, it adds a fuller arc for the character, but detracted from my overall enjoyment. Still, this is a phenomenal achievement in film-making, and should be watched by all. The trick is not minding that the film is so long.