In the First World War, British Lt. T. E. Lawrence (Peter O’Toole) is selected to assess the situation of Prince Faisal (Alec Guinness), who is having issues with the Turks. Going against the wishes of his superior officer, Lawrence catches the attention of the Prince, and advises a plan to attack Aqaba, a strategically positioned shipping port, by land, something deemed impossible due to the treacherous desert that must be crossed to do so. Even so, Lawrence and 50 men set out to do just that. 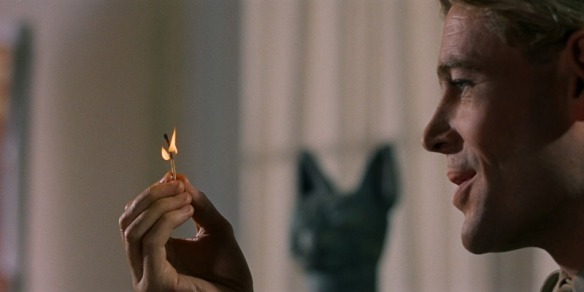 END_OF_DOCUMENT_TOKEN_TO_BE_REPLACED

During World War 2, a squadron of British soldiers are ordered to surrender to the Japanese, and are taken to a prisoner-of-war camp in Thailand. There, they are instructed to assist in the building of a bridge (over the river Kwai), and every soldier must help, regardless of rank. The Geneva convention clearly states that officers are exempt from such duties, s when they are forced to work alongside the rest of the men, the officers are thrown into containment. Meanwhile, a small group of men outside of the camp are planning to make their way through the jungle to destroy the bridge.

END_OF_DOCUMENT_TOKEN_TO_BE_REPLACED

Laura and Alec (Celia Johnson and Trevor Howard) meet every Thursday in town – he after work, and she to do the weekly grocery shopping. At first their regular meetings are nothing more than a newfound friendship, but it is not long before they fall for one another. The problem is, Alec will soon be leaving to work in Africa. Oh, and they’re both married, with families at home.

It’s a simple story, and therein lies the beauty. There’s no surprise ending, no unforeseen third act plot contrivance – in fact, the ending of the couple’s relationship is the first thing we see, but it isn’t until the end that we realise quite how devastating it is, as the events leading up to their separation are told chronologically through flashback, from their meeting when Alec assists Laura when she gets soot in her eye, through shared meals and cinema-goings, culminating in their final moments together, probably forever, in this day before social media and the ease of communicating with someone half the world away.

Our focus is on Laura and Alec, and in a way there is nothing in this film but them. Their families are largely only hinted at, other than Laura’s dull husband Fred, but even with only mild insinuation and a well-implemented voiceover from Laura we are offered as much background information as we need to realise their situation and motivations. Neither were looking for someone else, and both believed they were content with the lives they were leading. Everything would have been perfectly fine if they’d just never met one another, but fate is a cruel mistress, and the couple’s momentary enjoyment cannot possibly last, and the sadness comes from their clear understanding of this fact.

There are other marginal characters – the tempestuous relationship between the cafe owner and train conductor (who walks across the train tracks! It’s like a different world!) – but they are merely background, and serve to frame this story, rather than add to it. In fact, without their inclusion I got the feeling that Laura and Alec’s story would have struggled to breach feature-length, coming in at only 86 minutes. This length felt perfect for the story though. There’s nothing I could add, and nothing I’d take away, and if anything were to be added, it would be in the form of excess background – perhaps a love interest for Beryl, the tea room assistant, but there’s no need for it, and it’d just be padding.

I’m fairly sure this is the most British film ever made, and it’s popularity is probably the main reason behind the English stereotype of the stiff upper lip and clipped manner of speech that has become synonymous with my fellow Englishmen. The amount of scenes that involve the drinking of tea (something of which I’m fairly proud I’ve never done) are almost farcical, and everyone speaks as though they were born not with just a silver spoon in their mouth, but half the cutlery drawer rammed down their oesophagus. It’s this typically British sense of repressed feelings and not letting your guard down that really makes this film, as we see our two leads, particularly Laura, struggling to maintain their steely facades whilst underneath their hearts are being torn apart my these circumstances beyond their control. You can’t let these things be public knowledge, it’s just not how we do things around here.

There are many moments of intense emotion and poignancy, but if I had to pick one, it would be the traumatised look Laura gives herself in the mirror after the first time she lies to her husband, followed by the internalised “It’s awfully easy to lie when you know that you’re trusted implicitly.” She knows that there is nothing more wrong than what she is currently doing, but that she has no choice to do it anyway, and is just going to have to live with herself. By today’s standards the romance is almost laughably timid – the most that happens between the two leads is the occasional kiss – but the reactions and implications from these events are just as bad to our leads as if they’d been knocking boots five days a week for several months, if not more so.

This is one of the first films I’ve fully appreciated that doesn’t have a lot going for it in terms of action, humour or a happy ending that makes me feel all warm inside. Instead, this is heartfelt, emotional film-making, that shows just how much can be done with very little.

One of those Sunday afternoon sweeping epics that never seems to be off the TV schedule but before the List I’d never seen before (see also The Sound of Music, Gone With the Wind, The Ten Commandments), Doctor Zhivago was a bit of a disappointment.
For starters, it’s well over 3 hours long, but very little of that mammoth runtime left any kind of impression. Other than some striking imagery – a splash of blood in freshly fallen snow, a burst of yellow sunflowers against a dull, beige hallway – and a few admittedly impressive set pieces, there’s very little from this film that’s been committed to my memory banks.
Given there’s so much time to handle, the characters don’t receive much characterisation. This is a real shame, particularly for Omar Sharif as the titular medical man, who gives an engaging a bright-eyes performance, but of a character I still know very little about. His Sharif is born into a wealthy family in Russia, a little before the Bolshevik Revolution, and the film tells of his many and varied troubles throughout his, and Russia’s, history. On many occasions the history overshadows his life, as well it should, but the focus of the film is instead on him and his loves, for his childhood sweetheart Tonya (Geraldine Chaplin), whom he marries, is forcibly separated from Zhivago, forming a love triangle when he works closely with Julie Christie’s Lara.
At times the film reminded me of – whisper it – Pearl Harbour, particularly when I was asked to try and forget about the major historical event taking place in the background of a scene, and instead focus on the trivialities of the relationships of the leads, but just like Michael Bay’s explosion-fest, the grand scale of the set pieces was very impressive. Be it the hundreds of singing extras at a rally that becomes a battleground against an army of sword-wielding Cossacks, or the miles-long trudge Zhivago sets out on to return home through the snow, there is little shortage of spectacle.
Look out for Klaus Kinski on a train, and listen as your cries for more Alec Guinness – as Zhivago’s brother Yevgraf – go unheard. Whilst the film is certainly at times impressive, especially for its time, today it doesn’t really hold up, though it is certainly better than Pearl Harbour.
Choose life 6/10

Dickens is my favourite writer of whose work I’ve read very little, and remember even less. I’m going to put that down to his being the West Wing character Sam Seaborn’s favourite writer, and because what I can remember is exquisite. I’m attempting to correct this literary oversight by reading the complete works of Dickens, however I’ve had David Copperfield sat in my bookcase for a few months now and have yet to even slide the book from its old fashioned cardboard sleeve and leaf through the hair’s breadth pages. This is not for want of trying, it just seems that another book will jump out at me sooner, or an issue of Empire will be posted through my door (I’ve recently ended my subscription to Total Film for this very reason, for two film magazines and my girlfriends insistence that I subscribe to Esquire leaves precious little time for reading anything else before the next month’s batch comes through the letterbox). If anything, Great Expectations has inspired me to pursue my Dickensian endeavours ever further, with its rich characters, superb storytelling and above all marvellous dialogue, taken directly from the pages written 150 years ago.
The first Dickens adaptation of director David Lean, followed by Oliver Twist 2 years later, bizarrely absent from the list, the film does have its flaws. A 38 year old John Mills was far too old to portrayal the youthful 20-year old Philip ‘Pip’ Pirrip, with the wrinkles in his forehead too far engrained to be concealed, and Alec Guinness, as his roommate Mr. Pocket, always looked better fighting with a light sabre than with a boxing gloves. Other than this, Lean directed wisely by remaining true to the book, a tactic that would make this a must see if directed by anyone.
Choose film 8/10