When the dead start to rise and walk the earth, hungry for the flesh of the living, four people manage to flee to the relative safety of a shopping centre.

Normally I like to go slightly more in depth with my film synopsis at the start of the review, but looking back that single sentence up there pretty much spells out the entirety of the plot right up until the last act, and this is after I just admonished Night of the Living Dead for having a very basic plot. I think comparatively the two films do have a similar story – people attempt to survive together in a confined space during a zombie apocalypse – but where Dawn becomes more entertaining is by increasing the size of that space – expanding from a single house to an entire mall – and having a great deal of fun with it. The entire middle of Dawn is essentially our four characters just living in this new environment, how they make it inhabitable and the eventual problems this can cause when others might want what they have. 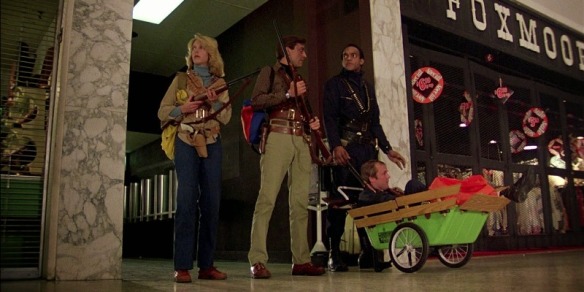 So who are our four? There’s two friends, Stephen (David Emge), a helicopter pilot, and Roger (Scott Reiniger), a cop. Stephen brings along his TV producer partner Fran (Gaylen Ross), who is pregnant with his child, and Roger invites fellow cop Peter (Ken Foree) to join them too. Acting-wise they are all decent, with perhaps the character of Roger getting the most to do in terms of variety, as though he starts out as a reasonable guy, the stress of the situation eventually over-excites him a little, sending him over the edge with a more cavalier attitude, which threatens to derail their daily life.

The sexism resplendent in Night of the Living Dead is a little more toned down here, but not gone completely. At a refuelling stop on the way to the mall, Stephen and Fran go to collect some supplies, but on the return journey Stephen finds himself beset upon by a zombie. Fran is relatively close by, and just stands there watching, unable to either flee or provide assistance, which is a little irritating to watch. However later on she becomes one of the most forward-thinking of the group, insisting that more than one person should learn how to fly the helicopter, just in case the worst happens to Stephen.

The pit-stop also provides one of the most iconic scenes of the film, that of a zombie having its head chopped off by the helicopter blades. In my memory I’d remembered it as this ridiculous looking effect, where the blue-skinned zombie has an incredibly fake looking extra twelve inches of forehead stuck on the top of his head to hide the cut line, but in reality it actually looked quite decent. For the most part all the effects look pretty good and whilst being occasionally gory, they pale in comparison to later films in this franchise (see my review of Day of the Dead, hopefully coming soon). 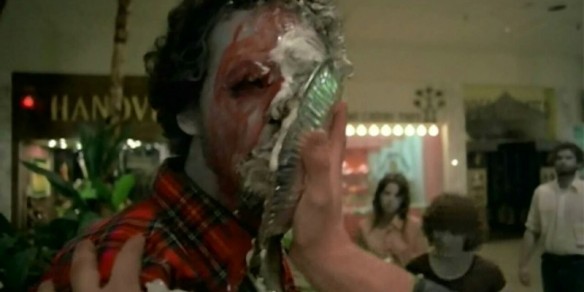 Where this film has the most fun is in the middle sequence, after the mall has been successfully cleared of zombies and our heroes get a chance to kick back and live life. However I feel at times the tone gets a little too lighthearted, leading to comedic shenanigans exacerbated by a score that sounds more like a Mario Bros. video game than something fitting for an apocalyptic scenario. And once the climax occurs, in which a separate group of people encroach upon our heroes, the silliness increases ever more to include pie fights, mannequin looting and a guy attempting to test his blood pressure whilst surrounded by the attacking undead. It’s perhaps just a bit too goofy, but still entertaining. And the chaotic editing of this sequence also makes it difficult to ascertain just what exactly is going on, but that could be in keeping with the unruly nature of the scene.

This is a far more enjoyable film than Night of the Living Dead, and remains the most out-and-out entertaining of Romero’s franchise, and one of the best zombie films ever made, just don’t expect to take everything seriously.