In an undisclosed future date, Theodore (Joaquin Phoenix) doesn’t have much in life. He lives alone, almost divorced from his wife Catherine (Rooney Mara), with his only intimate moments taking place with strangers over the phone. For work he writes personal messages to and from people he’s never met, and he spends his spare time playing video games featuring a verbally abusive child-like being. That is until Theodore meets Samantha (Scarlett Johansson). She understands him. She spends all her time with him. They make each other laugh and have stimulating conversations. Oh, and she’s the operating system on his new phone.

Over on the Lambcast we recently held a draft of Scarlett Johansson films and, spoiler alert for that show, but this was the first film I picked, despite Johansson not appearing on screen. Her role is entirely vocal, but she still gives one of the greatest performances of 2013. Looking at the nominees for Best Supporting Actress at the Oscars that year, there’s absolutely no argument that she shouldn’t be nominated over the likes of Jennifer Lawrence in American Hustle or Julia Roberts in August: Osage County. It’s astonishing how Johansson gives such an expressive, emotional and vivid performance using just her voice, so much so that I feel if the phone design were to be changed to feature a visual representation of her instead of a blank screen then something would be lost in the performance. The distance between Samantha and Theodore would also feel less great, their blossoming relationship less other, if we could visualise “her” as another human, not an inanimate object with adaptive reasoning. 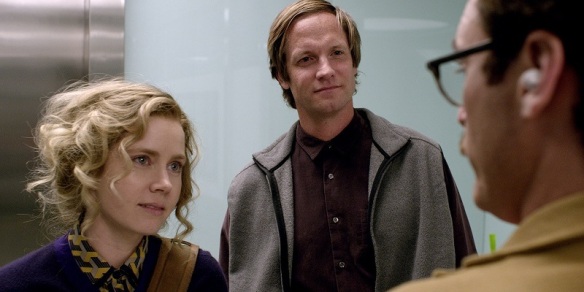 Outside of Johansson’s performance, the star of the show here is Phoenix in one of his more subdued roles. He’s always great at playing characters who are often a little outside of societal norms, but in the technology-obsessed future presented here – which looks more and more like the technology-obsessed present we reside in today – most people seem more than a little off, and not just because of the high-waist trousers. Chris Pratt, as Theodore’s colleague Paul, comes off as decidedly odd, his neighbour Amy (Amy Adams) is introverted and wrapped up in her documentary work watching people sleep (there’s nothing wrong with being introverted and driven, it’s just not the kind of character we’re used to seeing in film) and everyone else Theodore encounters seems, at best, to be emotionally fragile or better suited to dealing with others from a distance, such as Olivia Wilde, with whom Theodore has a blind date that almost goes successfully, right up until the point where it doesn’t.

The main reasons I love Her though aren’t the performances. What draws me to this film are the world building and the production design, both of which combine to showcase a future vision that is amongst the most believable and recognisable as an extrapolation of the world around us, especially during the current pandemic wherein a reliance on technology to assist every aspect of living has become crucial. In Her everyone walks around or rides public transport with their eyes cast slightly downwards, fixed to their screen of choice, very much like today. Relationships are created and occasionally lived out entirely online, video games are fully immersive hologram experiences where you physically talk to the characters, and they respond in kind. All of this feels directly linked to where we are today, but some aspects – Theodore’s job, for example – seem more fictional, but when you think about it they’re possibly not that far from being a reality. For work Theodore writes personalised messages to and from people he doesn’t know. It seems they are being written “from” someone who is otherwise too busy or believes they are not good enough at writing to forge the messages themselves, and it’s unclear whether the recipient knows the message has been written by a ghost writer or not. There are some couples for whom Theodore has been writing messages for years, without ever really knowing or meeting the people he is writing about, yet he has forged and influenced intimate details of their relationship by selecting and repeating loves for individual attributes. It’s fascinating, and entirely believable in the not-too-distant future, as it’s not too far away from the “personalised” digital birthday cards from the likes of Moonpig.

As for the production design, it’s gorgeous. Theodore’s new phone is sleek and simple, elegant and modern yet classic and tactile. I love it. The interior of his apartment is sparse and clean, yet it feels homely and lived in, albeit from a very isolated form of living, and the costume design, particularly the colour schemes, is beautiful.

Her isn’t on the 1001 Movies You Must See Before You Die list. It’s not. Fortunately Empire readers ranked it amongst the top 301 films (#163) in 2014, so I’m covering it here to cross it from that list, but I feel it is absolutely worthy of being amongst the hallowed 1001. I can understand it not being for everyone – there are some intense but purely audible sex scenes and the vision of the future is at times a little depressing – but as an interesting new spin on a romance story coupled with an inspired vision of the direction the world is heading in, I see no reason why this isn’t essential viewing for everyone.