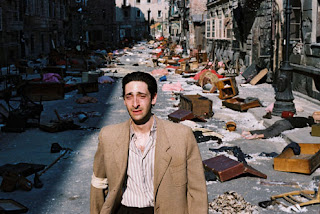 The Pianist tells the story of Wladyslaw Spzilman (Adrien Brody), a Polish Jewish pianist during the years of the Nazi regime. He and his family are forced to move to a small flat in a poor area behind a wall, forced to walk in the street and dance for the amusement of the Nazis. When his family are taken away to a concentration camp, Spzilman manages to escape and must live as a fugitive in a society refusing to accept Jews as real people.
This is not an enjoyable film. The first half especially, where we see the horrifying hardships bestowed upon the Jewish people will shock and appall everyone. The moment when a wheelchair-bound man is thrown to his death from a balcony for not standing up is excruciating, and Roman Polanski’s camerawork is unflinching, showing you everything that he himself went through as a child. Brody’s restrained performance, rarely off the screen, carries the picture, showing Spzilman as a man not intent on fighting back, just surviving. It must be remembered that, throughout all the suffering he endures, he is one of the lucky ones, able to survive with the help of people on the outside.Choose film 8/10

1 thought on “The Pianist”