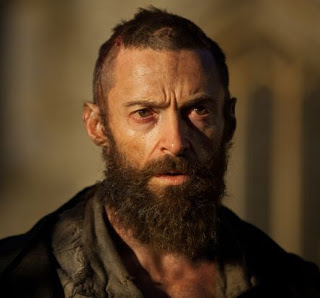 Jean Valjean (Hugh Jackman) has worked his last day of nineteen years of slavery, all for stealing a loaf of bread to feed his starving family, and subsequently  trying to escape. Upon his release he is informed by policeman Javert (Russell Crowe) that he will be on parole for the rest of his life, so Valjean flees and tries to make a life for himself anew. Some years later, Valjean has become a successful businessman, but Javert remains on his tail, which distracts Valjean at a key moment, which in turn dramatically affects the future of one of Valjean’s employees, Fantaine (Anne Hathaway), and her young daughter Cosette. Some years later, and on the eve of the French Revolution, Cosette (Amanda Seyfried) becomes the object of affections of Marius (Eddie Redmayne), a young but prominent revolutionary, who is himself adored by Eponine (Samantha Barks). 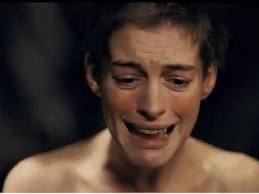 I never turn down a trip to the cinema, especially since I’ve started writing reviews, and even before then I went to see some pretty damn terrible films in the theatre, just to go (The Mummy 3, anyone?). So when my girlfriend suggested dinner and a movie out last Friday, I jumped at the chance. The only problem, however, was her proposed film choice; Les Miserables, or Gangster Squad. It’s not that I didn’t necessarily want to see either of these films – Les Mis has received impressive reviews, and Gangster Squad has a pretty good cast and lots of shooting – but neither one really appealed to me that much. We (read: she) opted for the former, and seeing as I tend to buy my cinema tickets in a similar way to how Daniel Stern bought artwork in Hannah and Her Sisters – he opted for size, I for duration – Les Mis‘ 157 minutes easily beat out Gangster Squad‘s 113.

So why didn’t I want to see Les Miserables all that much? Well, to put it mildly, it sounded a bit depressing. My French isn’t that great, but I was able to deduce that the title’s translations wasn’t along the lines of ‘The Happy Ones‘ or ‘The Mirthmakers.’ I don’t mind the sadder films, but I don’t necessarily seek them out for an enjoyable Friday night out. Also, and this will probably come as a surprise to very few, Les Miserables is a musical. Again, I don’t mind musicals, and in fact there are a few that I actually quite like, I’ve just always felt they were better suited to happier stories, or ones where song-and-dance numbers fit naturally into the plot, like Moulin Rouge or Chicago. From what I knew about this film before going in there seemed to be more than enough plot to suffice, without the need for resorting to having a little sing-song along the way. And I’d assumed that it was these unnecessary songs that would have led to the extensive runtime of the film.

Well, rest assured, it didn’t take long for me to be regularly glancing at my watch, and I was rather close to leaving the cinema from boredom, but the fact that I’d paid almost £20.00 for two tickets kept me in my seat. My main problem was that not only were there multiple songs, but almost all of the dialogue was sung as well. I’ve come across this once before with The Umbrellas of Cherbourg, and I found it intensely annoying then, and almost as much this time around. There’s an initial conversation between Valjean and Javert that is almost unbearable, although this is arguably due to Russell Crowe’s singing style. He’s not necessarily a bad singer – he’s been in at least three bands since the 1980s – but his ability and technique aren’t quite right for this sort of production. He doesn’t seem to have an adequate amount of power behind his voice, and he’s often overshadowed by his co-stars or the orchestra. And he rhymes with his own name far too many times. It took a while to get used to the singing, which admittedly is for the most part absolutely amazing, and what was very annoying was that a couple of times as soon as an actor had proven their worth as being a wonderful singer, their character was soon after killed off, ensuring we’d get to hear no more of them in the film. Also, the sheer never-ending abundance of songs meant that each one wasn’t really given enough time to breathe before the next one had come along, so in my memory lots of them kind of flowed together into one long song.

I’m aware that this is a silly issue, but when someone is singing, rather loudly, in the vicinity of people who are sleeping, surely the singing would wake them up? And when Valjean stumbles across Cosette and Marius singing at the bottom of his garden, surely his first question should have been asking what all that racket was about? And I can’t stand when more than one character is singing along to the same song, regardless of whether they are within earshot of each other. I can just about get on board to a couple singing to one another when they are in the same room, but miles apart? No. This did, however, lead to my personal highlight of the film, a rousing rendition of One Day More sung by all the predominant, surviving cast members, that was the closest I came to giving a standard ovation, because as much as I’ve been hating on the film so far in this review, I actually pretty much loved it.

Yep, once you get past the initial thirty minutes or so, which to be honest are a little dreary, this film really does pick itself up. This occurs when two things happen. Firstly, Anne Hathaway appears on screen, and if she doesn’t have her Best Supporting Actress speech rehearsed when the Oscars come around, she may find herself a little embarrassed on stage. Her rendition of I Dreamed A Dream is, quite frankly, breathtaking, and managed to temporarily distract me from the obvious discolouring of her teeth. She makes possibly the biggest impression of anyone in the film, and with one of the shortest amounts of screen time to boot. Secondly, we are also introduced to Cosette’s guardians, Thenardier and his wife (Sacha Baron Cohen and Helena Bonham Carter), who finally add some much-needed frivolity and raucousness to the proceedings with their performance of Master of the House. Fortunately these two are around for far longer than Fantaine, so I got to enjoy them several more times throughout the film, and always with the same level of joy. The Thenardiers are the greatest benefactors of director Tom Hooper’s use of live on-set singing during the film’s production, rather than the cast recording the songs months in advance, as it allowed far greater improvisation and emotion to be wrought into the lines. I’ve heard some people say they didn’t notice the difference, but personally I approved, and the performances had far more ‘acting’ in them than in a more traditionally made musical.

It was clear that Hooper was keen to clearly distinguish this film from the stage equivalent, he used an abundance of close-ups, particularly during the bigger songs, as well as huge sets on a grand scale. The whole film opens on a monstrous ship being pulled ashore by hundreds of chained prisoners, and elsewhere there are cannons firing, epic processions, horses, battles, long, labyrinthine takes and many other tropes that would be almost impossible to recreate on stage. I’ve not seen the stage version (and to be honest, I’d rather just watch the film again), but I’m guessing this film incarnation felt a lot more cinematic.

I also want to mention Samantha Barks, who plays Eponine, the revolutionary with eyes for Marius. Although she is snappably thin, she was easily one of the best singers on the screen, which isn’t surprising when you know that she was also chosen to play the same role in the 25th anniversary of the stage show. Eddie Redmayne was also great as Marius, but Amanda Seyfried couldn’t quite get past the insipidness of her somewhat bland character, whose job is just to look pretty, cry and try not to get too dirty.

One quick note to my fellows patrons at the screening I saw. Please refrain from bringing canned drinks into the cinema, and opening them during quiet points in the film, they make quite a lot of noise. Also, if you must open a bag of sweets, do so during a song’s crescendo, not the build-up or brief lull afterwards. And if you want to bring a very noisy plastic bag of popcorn, I’d appreciate it if you could steal one of the cardboard tubs available at the kiosk, they are so much quieter. I swear, some people were trying to rustle in time to the music. And to the gentleman who decided that halfway through I Dreamed A Dream was the opportune moment to go to the bathroom, precisely what had you heard about this film before viewing? Were you not aware that Hathaway’s monumental piece has been widely touted as one of the highlights of the film? Fool.

Anyway, those moments aside, I thoroughly enjoyed this film. It didn’t quite reduce me to tears (apparently I’m dead inside), but many others in the cinema were ineffectively stifling sobs come the close. Upon leaving, I was pretty sure I wouldn’t necessarily want to see it again, but now I’ve had time to let it all sink in I look forward to my next viewing, and I’ve already put the soundtrack onto my Amazon wishlist.