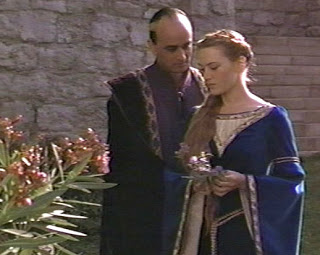 It seems I didn’t quite think through the strategy of watching the entire careers of various prestigious film-makers. Who’d have thought that, before they became renowned and laden with numerous awards, actors would take any roles going to pay the rent, regardless of the claptrap they may be. And so it is with A Kid in King Arthur’s Court, the family-friendly second entry on Kate Winslet’s CV, and what I hope will be the worst, although seeing as I’ve still got The Holiday to watch at some point, this may not be the case.
Directed by Carl Gottlieb (Mannequin, Hulk Hogan’s regrettable Mr. Nanny), this sees Calvin Fuller (Thomas Ian Nicholas, who apparently isn’t just Kevin from American Pie) being accidentally summoned from striking out in his baseball game by Merlin (Ron Moody), with his mission being to save King Arthur (Joss Ackland) and prevent the kingdom of Camelot from falling into the hands of the evil Lord Belasco (Art Malik). Whilst there, he falls in love with Arthur’s daughter, Princess Katherine (Paloma Baeza), and is trained to be a knight by Daniel Craig and his bowl haircut. Oh, and Kate Winslet plays Arthur’s other daughter, Princess Sarah, whose hand in marriage is up for the grabs at a jousting tournament, which Belasco intends to win.

Before anyone starts complaining, I’m fully aware that this is a children’s film and, at least on the outside, I’m not a child. What I am is someone who appreciates good films, and this most certainly is not one. Aside from the ridiculous plot and dreary title, my main hang up with this film is the Calvin’s ludicrous use of 90s slang and his expectations that the medieval townsfolk are going to understand it. That, and despite his outlandish clothing and, to their minds at least, his casual use of witchcraft (he demonstrates a handheld stereo, flashlight, rollerskates and a laser), he is never even threatened with being burned at the stake. Children’s films do not need to star children to appeal to children, and in fact this only rarely works. Take Star Wars for example. Millions of children connected with the original trilogy, almost entirely devoid of halflings, yet far fewer liked the remakes, which put a kid front and centre. I’m not saying the only difference between the trilogies is the age of the star, but I think you get my point. In fact, when I was younger the Indiana Jones films were a big part of my life, and the most annoying part of them for me was Temple of Doom‘s Short Round, the most prominent child in the then-trilogy. Speaking of which, if you’re making a below-par film, it’s probably not a good idea to namecheck far greater pictures in a similar genre, as happens here with the likes of The Princess Bride and the aforementioned Indy sequel.

The script is cringeworthy at best, and was in places reminiscent of the worst parts of Terminator 2, when John Connor tried to teach his robot protector common colloquialisms, as happens here with Calvin and King Arthur. Be it calling Belasco Elastic, or referring to a magical well as a jacuzzi, I found myself wanting to throttle the lead rather than see him become victorious in his quest, which was always a little hazily defined as to what he had to do, but of course culminated in an easily distinguishable tournament. Some of the better and more interesting elements were underplayed – the subplot involving a mysterious knight, and how had the kingdom become so neglected – but I’m guessing these areas were considered less interesting to younger audiences, who would obviously rather see a Dark Ages blacksmith inventing the bicycle, or a kid creating the world’s first Big Mac.

The adult performances were OK, and made up for the lacklustre ones given by the younger cast members. The pacing and overall plot structure could have been improved – I think there should have been more time spent in the present, setting up Calvin as a kid who hated his world, but would come to appreciate it more later, and the start seemed to set up a moral in which the best thing to do in life is at least try, but this is quickly forgotten in favour of, well I’m not sure really. Either way, don’t bother, and if you’re looking for a time travel film to show to children, I’d go with Bill & Ted, I loved that when I was a kid too.

2 thoughts on “A Kid in King Arthur’s Court”