Melanie Daniels (Tippi Hedren) is the wealthy, carefree daughter of a newspaperman (not a man made out of newspaper, that would be biologically impossible, he’s a man who runs a newspaper, stop being so silly). One day, whilst attempting to purchase a talking mynah bird at a pet shop she begins a back-and-forth with Mitch Brenner (Rod Taylor), a lawyer who had a dalliance with her in the past. The two hit it off, and when he leaves she tracks him down to give him a pair of lovebirds as a prank-slash-gift. Alas, he has gone to the nearby Bodega Bay to visit his mother and younger sister, so Miss Daniels heads there too. Upon arriving, she begins to notice all the birds in the town are behaving strangely – the chickens belonging to Mitch’s mother Lydia (Jessica Tandy) won’t eat their feed, a seagull attacks Melanie in a boat and another flies head first into a closed door. This, however, is just the beginning. 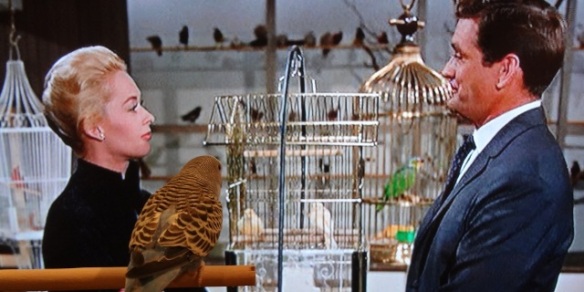 The tricky thing with effects-laden movies is ensuring they still function effectively many years later, and this is none more clearly seen within horror, where so often we see attacks from giant horrific creatures or mass swarms of ravenous beasts. Unfortunately for The Birds, which was released in 1963, many of the effects used then simply do not hold up 50 years later, and the film suffers because of it. Hitchcock’s infamous use of tying real life live birds to his actors is barbaric, and seems entirely unnecessary for the shot it was most famously used in, when towards the end our heroine finds herself facing a collective noun of birds in close quarters with no escape. The intention of the tying was to prevent the creatures from flying away, yet the rapid Psycho-shower-esque cutting makes them almost impossible to make out anyway, so I can’t help but wonder if the torture Hitch put Hedren through wasn’t just for his own sadistic giggles. Many scenes quite clearly belay that a crewman is throwing enraged birds in the desired direction and others, such as an early sparrow attack inside a house, look down right laughable.

So, with all that being said, why is this still an amazing and at times truly terrifying film? Well for starters, like the best horror movies, the threat here is one we can never escape in our daily lives. Whilst Jaws prevented many people from swimming in the ocean and Psycho probably decreased the nation’s shower usage for a considerable time, the threat behind The Birds is not something that can be readily avoided. The next time you go for a stroll, count how long it is between you see a feathered fiend flying overhead, especially if you live on the coast (like me, and I now hate seagulls even more, treacherous bastards). A Nightmare on Elm Street used the same tactic – there’s no way you can not go to sleep, and there’s no way you can live your life without being attacked by the birds in this movie. And how would you fight such an attack if it happened? The hunters amongst us would be fine for a while, one imagines, but the rest of us would be oh-so-much birdseed.

Secondly, Hitchcock is a master at building up tension. The first half of this film is entirely build-up, establishing the character dynamics of Melanie, the man she is after, his disapproving mother, giddy younger sister Cathy (Veronica Cartwright) and dowdy, amiable former lover Annie (Suzanne Pleshette). Brief mentions are made to the odd bird behaviour – an abundance of seagulls, excessive chirping, a seagull flying directly into view at a pivotal moment – but our focus is on this male-female relationship brooding, and the potential non-deadly obstacles in their way. It even starts out as a fish-out-of-water near-comedy, with Melanie’s fur-coat clad, sports car driving media darling finding herself in a dreary fishing town, but any fears this will become a silly Renee Zellwegger rom-com are soon dispelled by Melanie’s aptitude at commandeering a boat. There’s no chance she will be getting marooned in the middle of nowhere, or falling face-first into the lake. 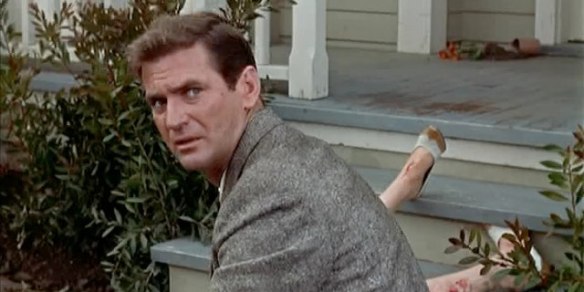 Once the attacks do begin, however, we get some terrific set pieces, from a swarm of sparrows down the chimney to a seagull attack on a child’s birthday party, and an explosive encounter at a petrol station. The latter suffers from some curious and distracting editing decisions – showing a snaking river of fire inter-spliced with static shots of Hedren in a frozen scream – which frankly do not work, but one can’t blame Hitchcock for trying something new. Easily the most famous sequence, however, is not a show-boating action one at all, predominantly featuring just one person – Hedren – sitting in front of a climbing frame outside of the school, waiting to take Cathy home to her distraught mother. One by one big black crows (or blackbirds, it’s discussed but never actually defined) arrive at the playground and rest on the bars. For a moment there’s only a few on there, a dozen or so, but whilst we see Tippi Hedren smoking a cigarette from various angles we hear the occasional flutter of wings as she sits there looking pretty, until she turns around and there’s birds everywhere. The frame is covered, as are the neighbouring roofs and nearby fences. That shit is terrifying. 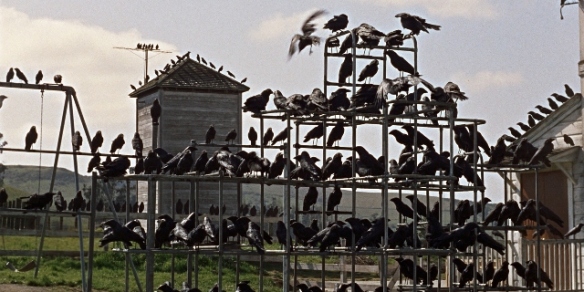 If there’s one thing I wanted more of from this film, it’s varieties of birds. I felt we only really saw the talon-soldiers of this onslaught, with the crows, sparrows and seagulls of the world. The climax reveals that for now this is only centred around area of San Francisco, but I’d have liked it to become global, seeing pigeons in Trafalgar Square taking out buses and taxis, vicious gangs of ostriches terrorising African tribes, rabid penguin huddles running rampant across icy plains. How amazing would a film be if it featured weaponised flamingoes? What damage could a flock of woodpeckers unleash? Pelican bombers! Ahem, I seem to have gotten a little off track. 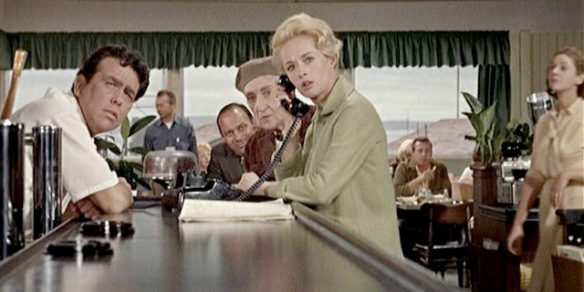 I’m still unsure of the resolution-less climax, which offers no definitive or sensible explanation for what we’ve just seen. I don’t mind so much that the threat isn’t contained, I’m just annoyed as to a lack of reasoning behind it all, but such is life. As it flies, I enjoyed and was terrified by this film far more than I expected, despite the hokey effects.

1 thought on “HitchcOctober Day 20: The Birds”