Whilst working as a paid companion (no, not that kind of paid companion; filthy mind) a girl with no friends or family (Joan Fontaine) meets the wealthy but recently widowed Max de Winter (Laurence Olivier). The girl’s obnoxious employer (Florence Bates) comes down with a bout of the flu, leaving Max and the girl to become acquainted enough for him to propose instead of losing her when the trip comes abruptly to an end. The newlyweds return to Manderlay, the stately home of the De Winters in Cornwall in the south of England (where Jamaica Inn was also set, and if I’d watched this when I was down there recently as well – and there was a chance; I took Rebecca with us as well – I think I’d have probably freaked right out), where the new Mrs de Winter feels very much out of place, especially because the memory of her predecessor seems to have a powerful effect on the house and its staff, particularly the head of the household, Mrs. Danvers (Judith Anderson). 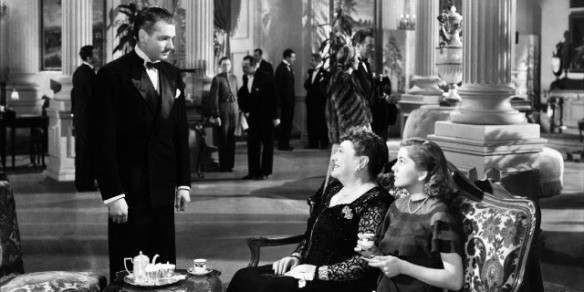 I went into Rebecca with high expectations. As far as I’m aware, this was criminally the only Hitchcock film to win the Best Picture Academy Award (my mind still boggles at the fact that arguably his best film, North By Northwest, wasn’t even nominated), and I’d also heard a great deal of praise heaped upon it by fellow French Toastie Jess, who has more than once described it as one of her favourite films. Needless to say, I had high hopes. 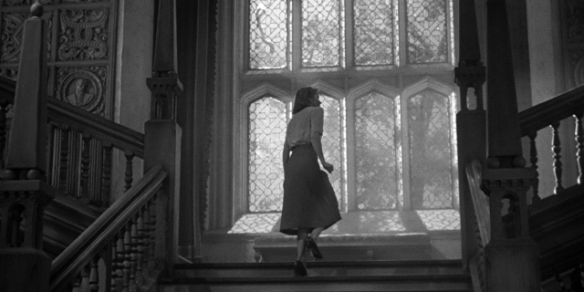 Fortunately these hopes were met, and whilst I didn’t love every aspect of the film, I still greatly approved of its existence and can heartily recommend it to others. Fontaine is terrific as the lead, who it should be noted is deemed so unnecessary before marrying Max that she is only ever known as Mrs de Winter; she has no name of her own (which led to a few clumsy scenes where she is referred to as “the girl” or “the bride” in order to attempt to obscure this point). She has only gained importance since becoming Mrs de Winter, and had no value to anyone beforehand, thus she never needed a name until now. Fontaine has a great arc to complete over the course of the film, going from uncultured and mildly ditzy every-woman to a nervous, paranoid wreck and everything in between. For the first half I felt Olivier made some odd choices with his performance, but these all came together after the revelations in the third act, so all’s well that ends well, as they say. 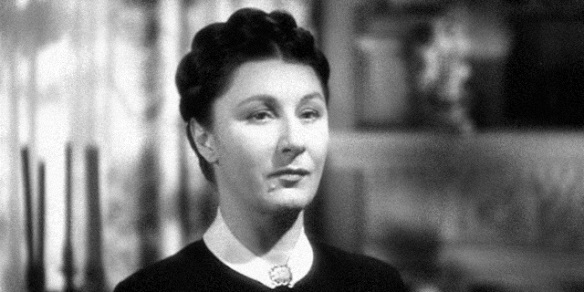 Mrs Danvers, however, could well be the most underrated of Hitchcock’s villains. She’s as despicable and unhinged as they come, potentially even beating out Norman Bates, up to the point where she attempts to coax Fontaine’s character to jump out of a high window, all drawn from a devotion to the former lady of the house, which is a role Danvers cannot abide seeing another woman holding. The real star of the film is, somewhat bizarrely, someone who never appears on the screen. We never hear their voice, never even see a picture of them, but they are arguably the main character. Rebecca de Winter, the former wife of Max, is crafted so well, all from descriptions and memories provided by the other characters, that she completely dominates the film. There’s even a scene in the third act in which Max recounts a story that prominently featured Rebecca, and the camera shows and follows exactly where she would have been during the events. She is so powerful and vital to the story that the camera follows her even when she isn’t there to be seen.

George Sanders is also a highlight as “Rebecca’s favourite cousin” Jack Favell, who gives an oily, smarmy performance which sadly doesn’t appear for more than a few moments until the final act. Alas, Sanders suffers from his magnificent voice, which makes me picture Shere Kahn every time he says anything (it doesn’t help that he always rolls his ‘r’s and caresses words to twice their normal length with that wonderful purr he has). I liked his performance, but felt he was a little mis-cast, as his character was supposed to be of a lesser class than some of the others. His dialogue included describing himself as “a perfectly ordinary, harmless bloke,” and if there’s one word in all the world that doesn’t fit George Sanders, it’s “bloke”. Baloo is a bloke, Shere Kahn is an aristocrat. 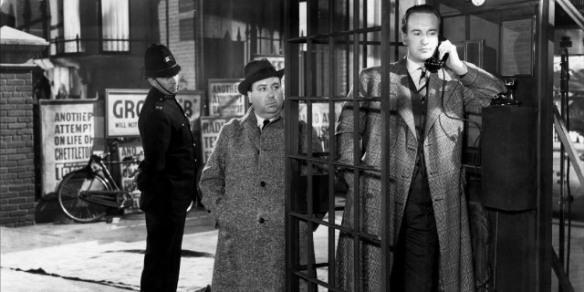 Plot-wise, the first half seems to be setting up that this would predominantly be a fish-out-of-water story, with the new Mrs de Winter struggling to adapt to a lavish lifestyle resplendent with serving staff and monogrammed stationery. She now lives in a house where a sentence like “I beg pardon madam, I’m afraid the fire is not usually lit in the library until the afternoon, you’ll find one in the morning room,” is perfectly normal. Bear in mind that her predecessor had custom-made underwear, hand-crafted by nuns in a convent and you’ll have some idea of the life she now leads. This is exacerbated by her initial meeting of her new staff taking place after being caught in a downpour in an open-topped car, so she is a little less presentable than she may have anticipated, and her new staff are understandably unimpressed. When it became clear that something was indeed up with the household she now resided within I thought the story might take a turn more akin to Vertigo, with Max trying to form his new wife into the mould of his old one, but again I was incorrect, and the path the story actually took was far better than anticipated, especially seeing as for a while I thought there’d be some ridiculous last minute twist which revealed there never actually was a Rebecca to begin with, so lets all breathe a sigh of relief that that didn’t happen! 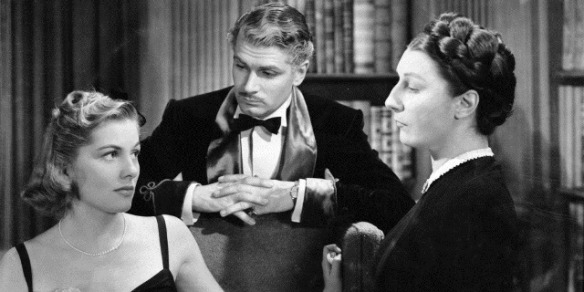 This was a wonderful drama, thoroughly deserving of all that praise, and which featured one of the best proposal scenes in cinema, with Max popping the question simply by yelling “I’m asking you to marry me you little fool” from the next room, before stating his proposal should have instead involved him making violent love to her behind a palm tree. Now that’s romance.