It’s hard to believe that 1985 was only 30 years ago. This film was made in ’87 (the year I was born, to put some later comments in perspective) but is initially set in ’85, and it feels more dated than an Elizabethan period drama. My theory is that the technology seen in the film – Gekko’s giant mobile phone, Bud’s blocky Lego-brick computer display, a 2″ TV screen, robot bartender – have far superior descendants that are used today, but which are almost unrecognisable from the technology they used to be. The 80s were at the very start of the technological age, so a film set just a few years earlier would probably not look anywhere near as dated due to the lack of blatant comparisons between life then and life now. What I’m trying to say is, if you don’t want your film to look dated, don’t centre it around technology that was cutting edge at the time, because chances are it won’t be even by the time the movie is released, let alone 27 years later. 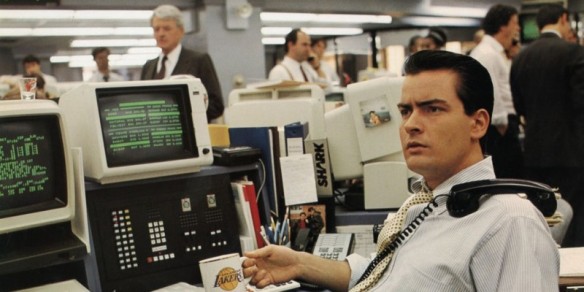 Wall Street has one of those typical Oliver Stone casts that never seems to stop. Alongside Sheen, Douglas and Sheen there’s Hal Holbrook, John C. McGinley, Saul Rubinek, James Spader, Terence Stamp, Sean Young and Daryl Hannah, however not everyone works. McGinley, for example, is an actor I normally appreciate in films, largely thanks to how much I loved Scrubs growing up, and how much of that was due to Dr. Cox. Here he plays Bud’s colleague and friend, Marvin, and is really, really bad. His character is supposed to be annoying and a bit over the top, but it always felt forced – especially his laugh. Everything about the character felt fake and out of place. Also, has Saul Rubinek ever played a character that wasn’t a lawyer or some kind of assistant? I swear it’s all the man ever does. Don’t get me wrong, he does it well and I like seeing him crop up in things, but mix it up a little, will you?

Speaking of the cast, I wasn’t all that impressed with Charlie Sheen here. I’ve never been a huge fan of the guy as a serious actor, probably because I’m far more familiar with his work in the likes of Hot Shots than I am with Platoon, and because I’ve seen him do more comedy it makes it hard for me to take anything he has to say seriously. However, even on an acting level I just felt he left a lot to be desired, and I’d have much rather seen someone like Tom Cruise in the role. Michael Douglas, on the other hand, is phenomenal as one of the greatest 80s villains that isn’t played by Alan Rickman or a giant marshmallow monster. He has an iconic look – the slicked back hair, shirt and braces and a devilish, evil grin, gives an enigmatic performance and holds your attention whenever he’s on screen. Also, as a West Wing fan, it was wonderful to see that that’s how Martin Sheen has always puts a jacket on. 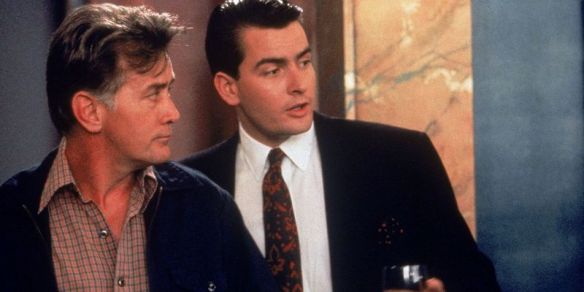 My biggest problem with the casting, however, is Daryl Hannah, who here is supposed to be an ultra-attractive vision that Bud falls for, and whom has also been with Gekko previously, but the first few scenes her character, Darien, is in, both myself and my partner thought she was a man in drag. She also suffers from the worst of the 80s wardrobe, at various times appearing to be dressed as a scarecrow and a race car. Also, she wasn’t great at the whole acting business either, so there’s that too.

I hadn’t seen Wall Street before, and even I’m a little surprised by that. It’s the kind of well known, commercially acclaimed movie that my Dad would have usually stuck on of an evening, yet this was a first time watch. Maybe I’d never been drawn towards it because the stock market has always been alien to me and never been an area I was interested in, with everything I tried to learn about it coming from Trading Places, and even then it still being something of a mystery as to exactly why the events at the end of that film occur as they do. Had I watched it sooner I’d perhaps be more forgiving of how dated everything looks. Plot-wise it is all largely predictable – this film doesn’t make any huge bounds in terms of storytelling, other than perhaps making a big deal about some points that, unless I was otherwise mistaken, never come around to have any effect. Much is made of Bud signing a contract within which the buck stops with him if anything goes wrong, and after that one scene I don’t remember it being brought up again, whilst traditional movie-watching should have made that element be the pivotal event in the story’s arc. If my memory is a little hazy please forgive me, as it was mid-way through this film that I found out Terry Pratchett had passed away, so the second half of the film was seen in a kind of morbid stupor, which doubtlessly affected me feelings towards it, so this review will be more than a little unfair because of that. 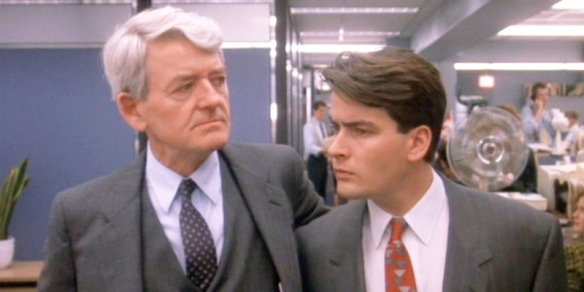 One element of this film that I really hated was the camerawork. I normally don’t have a problem with handheld stuff, with the camera shaking and flowing all over the place, but here it was really very distracting. The film is built primarily around a few key scenes of dialogue between a couple of the characters in close environments, and in these scenes – most notably the one with Bud and Gekko on the airplane, and with Bud and Carl in the elevator – the cameraman has a tendency to go for an extreme close-up on whomever is talking, then spins and pan back and forth as though filing the ball in a tennis game between the two conversationalists. Instead of letting the actors tell the scene through their performances, I was wildly distracted by this maniac with a camera. I was always conscious of the guy behind the lens, planning on where he was going and at what he was going to point his camera, instead of being focussed on what was happening on the screen itself. 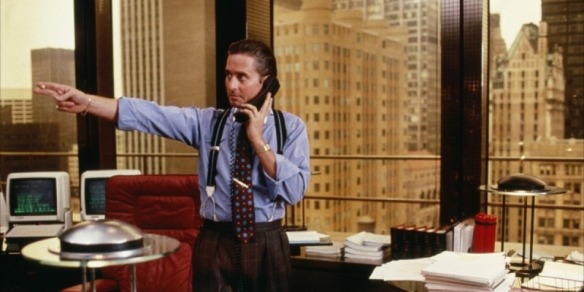 As a study in 80s culture and excess this is worth your time, particularly the montage of Bud moving into and decorating his new apartment, plastering faux brick rifts and plaster cracks onto his new, pristine walls, before preparing a meal with a spaghetti maker and rice ball sushi machine. As a film being watched for the first time today for entertainment purposes, I’d give this a miss.