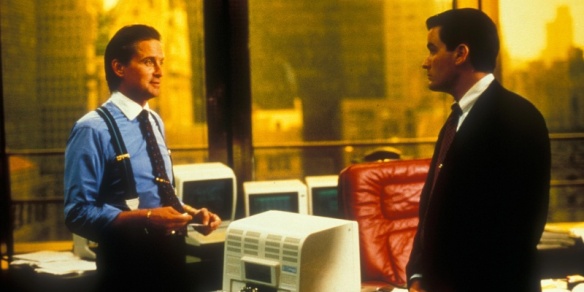 END_OF_DOCUMENT_TOKEN_TO_BE_REPLACED

This review was originally written for French Toast Sunday as part of my USA Road Trip feature.

How much of an introduction do I really need to give Ferris Bueller’s Day Off? I’m hoping none but, as much as it pains me to say, there’s probably a few unenlightened souls out there who have yet to discover the wonder that is this film. Ferris (Matthew Broderick) is an unimaginably popular and enterprising teenager who, one day, decides to pretend to be ill and skip school. It’s something he’s perfected into an art form – this is far from his first game of hookey – but this time he’s roping in his girlfriend Sloane (Mia Sara) and hypochondriac best friend Cameron (Alan Ruck). Once the gang has been assembled and Ferris has “borrowed” Cameron’s father’s prized Ferrari, the trio head to Chicago for the best day they’ll ever have. Meanwhile, Ferris’ sister Jeanie (Jennifer Grey) and the school’s Dean, Mr. Rooney (Jeffrey Jones) both suspect Ferris to be faking, and set about trying to bring him down.

END_OF_DOCUMENT_TOKEN_TO_BE_REPLACED

Charlie Sheen is Chris Taylor who, after dropping out of college because he wasn’t learning anything, volunteers to fight in the Vietnam war, amongst recruits including Keith David, Forest Whittaker, Tony Todd, Kevin Dillon and a young Johnny Depp. The platoon is split, with half drawn to Willem Dafoe’s free-thinking, laidback stoner Sergeant Elias, with the rest, including brown-nosing Sergeant O’Neill (John C. McGinley), prefer the ethos of scarred Staff Sergeant Barnes (Tom Berenger), who counts success by how high the bodies are piled, rather than whether peace has been achieved.
There’s an interesting film buried in here somewhere, but it either follows Sheen’s naive, error-realising private or the conflicts between the two sergeants and their unrespected, inexperienced Lieutenant (Desperate Housewives’ Mark Moses). Some gripping moments stand out – a night ambush, and the colour slowly fading back in after a white-out napalm drop – but the rest is underwhelming and littered with trite or cheesy dialogue and 5-cent philosophising: “We did not fight the enemy, we fought ourselves, and the enemy was within us.”
Choose life 6/10