This review was originally written as part of my USA Road Trip series over at French Toast Sunday.

June, 1972. Five men are caught having broken into the Watergate Complex, specifically the headquarters of the Democratic National Committee. Routinely checking out their trial, reporter Bob Woodward (Robert Redford) begins to suspect something may be up through some odd details of the trial, and a shared phone number amongst the address books of some of the accused. Bob’s colleague Carl Bernstein (Dustin Hoffman) helps Woodward write a piece on the potential scandal, and the two of them – with the support of their editor Benjamin Bradlee (Jason Robards) and a highly secretive and selective informant known only as Deep Throat (Hal Holbrook) – dig ever further into how far this story goes. 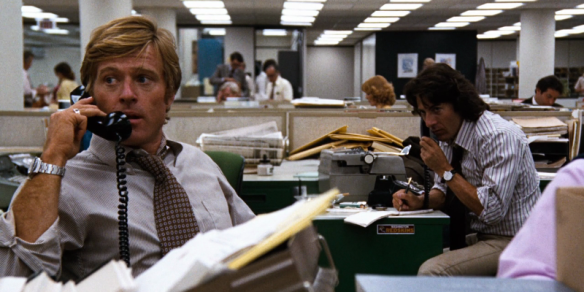 END_OF_DOCUMENT_TOKEN_TO_BE_REPLACED

Christopher McCandless (Emile Hirsch) has a very promising future ahead of him. Considering Harvard Law school after graduating from college, with a healthy savings fund and parents willing to buy him a new car, he’s set to make a name for himself in middle class middle America.
But alas, this is not the life he wishes to lead, refusing to make the same mistakes his parents made – marrying the high school sweetheart, living in an unhappy, abusive marriage for the sake of appearances – he gives his savings to charity, dumps his car, burns his ID and cash and changes his name to Alexander Supertramp, pledging to live life alone, “no watch, no maps, in the wild.”
Told through letters to his sister, accounts from those he met along the way and excerpts from his own diary, this true story, directed by Sean Penn, is at times joyous, tense and heartbreaking. There isn’t a weak link in the cast, but the standouts are easily William Hurt and Marcia Gay Harden as the confused parents left behind as their ideal son wanders for years with no communication, not even a letter goodbye.
Penn at times drifts too far into Terrence Malick territory (Malick previously directed Penn in the Thin Red Line), with elegiacal shots of admittedly beautiful scenery, poetic, philosophical pontificating and a meandering style, flitting between Alex’s journey across America and his time spent living in an abandoned ‘Magic’ bus he finds in Alaska, but the story and performances pull it through. You get the feeling the journey is exactly how Alex had hoped, finding the people he would have preferred knowing when growing up; the parental fellow travellers Jan and Rainey (Catherine Keener & Brian Dierker), girlfriend (Kristen Stewart), boss (Vince Vaughn), friends (the semi-nudist random Swedes) and kind hearted, lovably cantankerous grandfather (Hal Holbrook). The soundtrack is amazing too.
Choose film 8/10