Norman Maine (James Mason) is a world-renowned movie star who has it all, including a crippling drinking problem. His latest drunken antics see him disrupting a variety show he was supposed to be appearing at, and he finds himself dancing on stage with Esther Blodgett (Judy Garland), who was singing and dancing whilst accompanied by the Glenn Miller Orchestra. Esther has the wherewithal to turn Norman’s clowning into a comedic routine, and something inside of her catches the actor’s eye. Later that night, when his stupor has slightly worn off and he is scouring his regular haunts for a lady to take home for the evening (or rather, early morning by that point), there’s only one girl in Norman’s head. He finds Esther singing with the band at a deserted club, and offers her the opportunity of a lifetime; if she quits the band the next day, he’ll give her a shot at the big-time and make her a star. 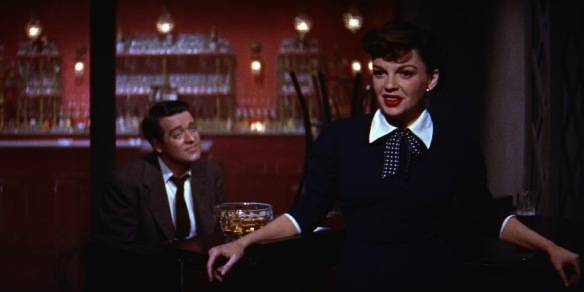 This film was nominated for me to watch by Kristen Lopez of Journeys in Classic Film, and I’m in no way surprised. If there’s anything I know about Kristen it’s that she loves classic movies (duh, it’s in the title of her blog) and especially so if they have female leads. Had it been made by Disney and starred Oscar Isaac, she’d have been furious that I hadn’t seen it a dozen times already. The other film Kristen has nominated for me follows similar traits as well, so it seems I’m correct. This is technically the first iteration of A Star is Born that I’ve seen, not having seen the 1937 or 1976 versions (the latter of which apparently features Gary Busey in a prominent role, so I may have to watch it just for that). However, it’s not the first time I’ve seen this story play out, because it’s been done many times before, most notably in recent years with The Artist, which also saw an established star finding his standings in decline whilst the young up-and-comer he helped get a big break and is romantically involved with becomes an even bigger star than he was to begin with, and that film accomplished the whole thing in a much shorter timespan and with a great deal more fun. However the stories are not identical, and one could argue that the final scenes of A Star is Born set it aside from the other imitators. 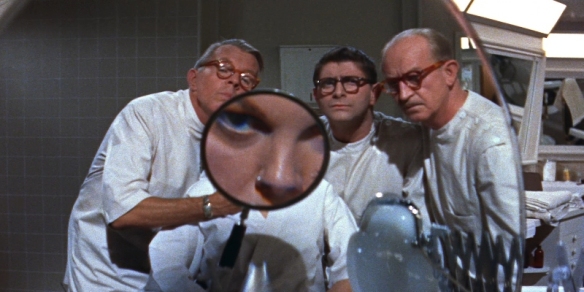 I’m not a huge fan of musicals. As with most genres, there are some I like and some I despise, but the only ones I unabashedly love are animated and were seen when I was a child, so the prospect of seeing new films tagged within the musical genre never makes me all that excited. However, I’m also a fan of films about films, so this had things going for and against it, and in the end stayed more in the positive column. The key I think is the performances, particularly the leads. This is only the second of film I’ve seen either Judy Garland or James Mason in (The Wizard of Oz and North By Northwest, respectively) and they both impressed me immensely, particularly Mason, even though he doesn’t have to do any of the singing or much of the dancing. Mason proves excellent at playing a drunk, but later in the film he’s even better at a man trying not to be one. Every moment of pain, pride, anguish and sorrow is clear about his person, so the fact that I’m due to watch him again in Lolita shortly makes me look forward to that film considerably. Garland proves she can still sing and dance, and act as well. She’s convincing both as the woman who has strived for many hard years to get where she is, and also as the bright-eyed newcomer to the not-as-glamorous-as-it-looked life of show business. Her first day on set sees her buffeted from one person to another, briefly meeting the studio head (Charles Bickford) who doesn’t bother to pause the new reel he’s previewing to make her acquaintance. 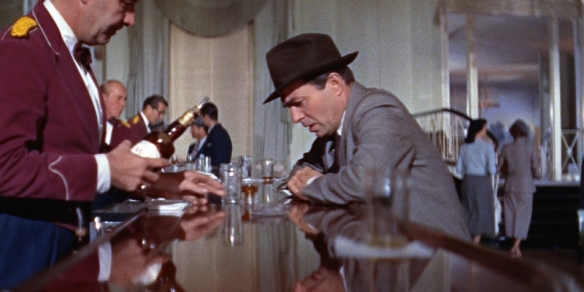 There’s a lot of good relationships on display here too. One of the more interesting ones is between Norman and his manager Libby (Jack Carson), who has had to put up with all of Norman’s antics for far too long, and is getting sick of it. To Norman it’s a game, with Libby dealing with them not because it’s his job, but because they’re good friends, but it turns out Libby doesn’t see it that way, and when things take a downward turn for Norman, Libby is there to kick him even further along. 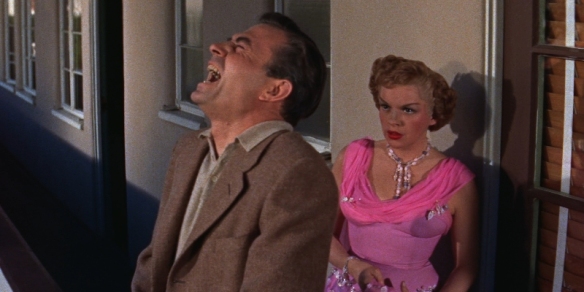 Musically, there wasn’t too much here that annoyed me. In fact, in the grand scheme of things, there aren’t that many musical numbers at all, and all of them are diegetic. Where most musicals see characters breakig out into song as they walk along, here they always have a purpose, either as part of a stage or film performance, rehearsal for such things, or one character genuinely singing unaccompanied to the other, on request. I approve of this greatly, especially in a film with as many serious turns as this one, because whilst the break-into-song option is often fun, it would have juxtaposed jarringly here. I also enjoyed the meta aspects, particularly those surrounding the film within which Esther (whose name is forcible changed to Vicki Lester without her even knowing until she picks up her first paycheck) makes her big break. It seems to be another version of A Star is Born, with Esther’s character having an entire song-and-dance montage about how she broke into Hollywood and moving pictures. Add to that a further level of meta-ness when, during the film, Esther attends an Academy Awards ceremony after having been nominated for Best Actress, only for Judy Garland to then have to go through the exact same thing in real life when she was nominated for this film. It’s a shame the events didn’t somehow occur the other way around, so that Garland could have drawn on her past experiences for the scene, not that she needed to. 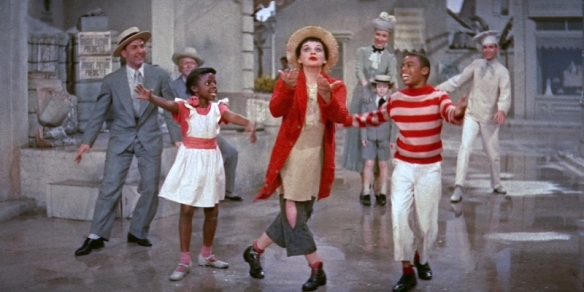 My only real quibble with the film is some elements of direction. After Esther quits her job at the band she is supposed to meet up with Norman the next day, however he finds himself being dragged away whilst still asleep to shoot a film on location at sea for weeks on end, leaving Esther in a strange town without a job, home or any friends, whilst Norman desperately instructs the studio on how to hunt her down, but to little avail. Much of this sequence is told with all the dialogue and sound mixing, but with visuals replaced with still, sepia images, with a slow zoom-in on the person speaking at the time. It’s almost as if the video footage was damaged, and the studio couldn’t afford to replace it, so did the best they could with publicity stills or re-staged photographs. If this isn’t what happened, it was a very odd and unusual choice that left me confused and did nothing in the film’s favour. 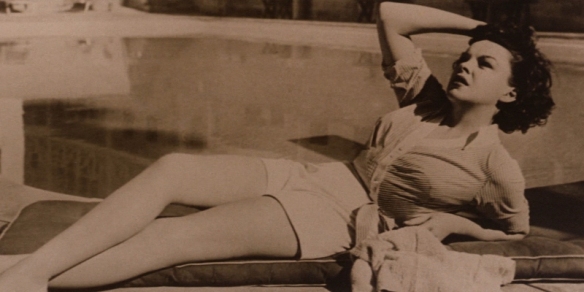 Other than that, this was a fine film. It’s not something I’ll probably ever watch again, but considering it’s a classic musical, the fact that I didn’t hate it makes it good enough to recommend, I just wish it had been a bit shorter, pushing almost three hours as it is.