It’s no revelation that Woody Allen has a tendency to write himself into his screenplays, but it’s unusual for him to write himself into two main characters within the same film, yet that’s pretty close to what he’s done here. Obviously the role Allen himself plays – the over-stressed television producer whose increased sense of mortality forces him to question his place in life and what happens afterwards – is quintessential Woody, but also the role of Elliot, played by the most unlikely Allen surrogate, Michael Caine, is very much cut from the same cloth, a point made all the more thought-provoking given they’ve both been married to the same woman. Elliot is an awkward, unconfident nebbish, an intellectual fan of poetry and literature reduced to acting like a giggling schoolboy in the proximity of his latest crush. Caine is magnificent in the role, one I’d have assumed he might have difficulty with, and he deservedly picked up a Best Supporting Actor Oscar for it.

In fact the whole cast is terrific (Dianne Wiest also won an award for Best Supporting Actress, whilst Allen picked up Best Original Screenplay, and the film was nominated for Editing, Art Direction, Directing and Best Picture). Alongside those already mentioned are the likes of Maureen O’Sullivan and Lloyd Nolan as the sisters’ parents, Fred Melamed and Richard Jenkins as doctors looking into Mickey’s case, Sam Waterston as a handsome architect Holly and April compete for, Julie Kavner (the voice of Marge Simpson) as Mickey’s long-suffering assistant and Daniel Stern in a scene-stealing turn as a newly wealthy musician attempting to purchase some of Frederick’s work based on size and colour rather than artistic integrity (he just wants something with a little puce in it, to match his ottoman). The cast is so deep that there’s a scene early on featuring Lewis Black, Julia Louis-Dreyfus, J. T. Walsh and John Turturro, all of whom get roughly one line apiece, but still most of them manage to make an impression.

In fact my only problem with the cast might be Allen himself. It’s not that he’s bad – how could he be, he’s essentially playing himself – it’s just that his whole story arc is very disconnected from everything else for almost the entirety of the film, yet the only section to receive more screen time than his is the Elliot/Lee affair. Granted, Allen gets the lion’s share of the comedy and the one-liners, plus some great cuts – in one scene he reassures himself, saying not to panic, immediately cutting to him waking up in the middle of the night screaming “I’m dying!” – but he often feels like he’s in a different film to everyone else, and had more time been spent elsewhere then perhaps some of the jumps in other stories wouldn’t feel quite so sudden or uneven. Plus with hindsight, and knowing more about his personal history than I’d perhaps like to, some of Allen’s dialogue is extremely unfortunate to be coming from both his mouth and his typewriter. When a joke on child molestation from Allen’s TV show has to be cut, his response is “Read the papers, everyone’s doing it!” and even something as innocuous as bemoaning the lack of attention he receives from his adopted children is soured by the line “How about a little action from the kids?” It’s important to be able to separate the art from the artist, but sometimes the artist makes that almost impossible to achieve. 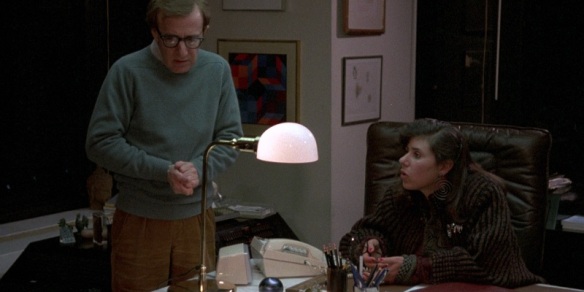 Fortunately Allen’s presence doesn’t ruin the film entirely, and what is left is a story that, considering the subject matter, is often far more entertaining that you might expect. The relationships and situations all feel real and natural whilst maintaining enough humour to keep them light and engaging, and I really can’t oversell how much I enjoyed Michael Caine’s performance throughout.

2 thoughts on “Hannah and Her Sisters”