Watching the original Toy Story, the first feature-length motion picture created entirely using computer animation, always send me back to my childhood, aged 8 years old, sat in the cinema watching in wide-eyed wonder as the pixels were brought to life before me, with my Dad sound asleep in the next seat. It’s one of my earliest film-related memories (my earliest cinema experience that I know of was the Lion King, but that’s another post).

Pixar, for it is they responsible for both this wondrous memory and, perhaps, my love of film in general, have crafted in Toy Story that most miraculous of creations, a debut feature near perfect in execution, akin to Tarantino’s Reservoir Dogs, or Sam Raimi’s Evil Dead. The secret to Toy Story’s success? My personal opinion is that, as with those others mentioned, the film has an overall, well known genre (children’s animation), but refuses to stick to it, flitting between and parodying a cornucopia of other film genres, including war (“A good soldier never leaves a man behind!”), the heist in Sid’s house, the zombie-like attack, a car chase, road movie, seemingly no movie staple is left untouched. 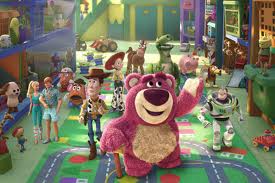 This multitude of movie pastiches continues through Toy Stories 2 and 3, taking in westerns, rescue missions, an amazing Star Wars riff, rom-com (Ken & Barbie), physical slap-stick comedy, a prison escape, nightmare sequence, even elements of horror, especialy with the trilogy closer’s truly disturbing screaming monkey. Also, the ending of Part 2, involves that greatest of movie staples, a mad dash to and around an airport, yet Pixar approaches each aspect so uniquely that they appear fresh and new.

One of the highlights of the trilogy is the immensely enjoyable opening to part 3, where the original films have become so well known that they are ripe for self-homage, with the fantasy openings of the previous two films merged together in a tremendously fun fashion, making Pixar seem like the best possible place to work. If anyone from Pixar is reading, dear God please hire me. Please.

If I have to fault the films (and alas I do) then it is the first film’s over-focus on its leads. Whilst the characters are good, and incredibly well inhabited by Tom Hanks and Tim Allen, it’s the supporting characters that really shine brighter, and keeping the leads away from them for the majority of the picture is the only fault I can really pick. This problem was fixed by the time Toy Story 2 was released, with Rex, Hamm, Mr. Potato Head and Slinky-Dog being given a lot more well-deserved screen time, although the introduction of the weakest main character, Jesse, is just about corrected by pulling the one-two casting coup of Kelsey Grammar and Wayne Knight. 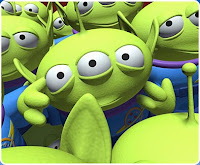 Also, being a mechanical engineer by day, I can’t help but ignore that not all of the physics works out, but then this is a film in which inanimate toys come to life, so maybe that can be ignored. Also, at the end of Toy Story 3, how does Andy know Jesse and Bullseye’s correct names? He was given them as gifts, and originally called Jesse Bazooka Jane. Sorry, shutting up.