The Green Mile falls into the category of films I love and have loved for a long time, but which I don’t watch all that often. There’s many reasons for why I love it, which I’ll get to, but only two as to why it’s not something I reach for every other weekend. Firstly, it’s pretty darn long. We’re talking over three hours, not counting the credits, so when you want to sit down and watch this movie, it’s a commitment. Secondly, it’s pretty damn sad. There’s levity and lightness throughout, but this is a story that will stay with you emotionally, and I make a habit of getting something stuck in my eye pretty early on and have a hard time of shifting it for a while. What puzzles me, however, is just how little The Green Mile gets discussed. 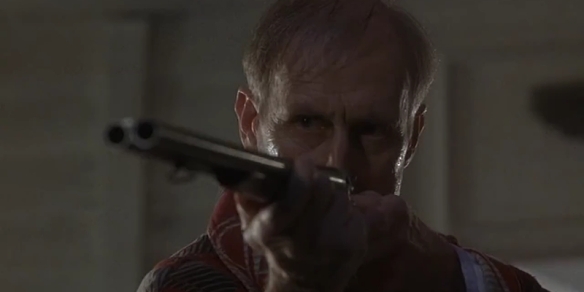 Following up from his feature debut of The Shawshank Redemption, director Frank Darabont had big shoes to fill, and perhaps should have opted for something other than another prison-set period piece written by Stephen King. The Mist has since proved that Darabont is capable of directing outside of that niche sub-genre but, as much as I didn’t hate The Majestic, you can also see why he might be happier within his own wheelhouse. And when you do it this well, I have no problem with that. This is by no means as great as Shawshank, but if that film didn’t exist I think The Green Mile would be far more hallowed than it is, because other than getting a little sappy at times it doesn’t put much of a foot wrong.

For starters it contains a veritable cornucopia of character actors. Hanks is the lead of course, but he’s surrounded by a collection of some of the greatEST that-guys in the business. His fellow officers are comprised of David Morse, Jeffrey DeMunn and Barry Pepper. Their boss is James Cromwell, whose wife is played by Patricia Clarkson, whilst Hanks’ wife is Bonnie Hunter, and Darabont regular William Sadler is the father of the girls John Coffey is accused of killing. And the prisoners in the cells are Graham Greene, Michael Jeter and the great Sam Rockwell, in arguably the break-out role that catapulted him to the much-loved actor we know today. Rockwell plays Wild Bill, an unhinged psychopath whose many villainous deeds have finally caught up with him. He’s one of the most evil people on film (almost as bad as Hutchison’s Percy), but he’s at least creative and entertaining to watch, despite how much of a shit he is. Oh, and Gary Sinise and Harry Dean Stanton are in there too, twice for Stanton actually, seeing as the characters played by DeMunn and Pepper are called Harry and Dean Stanton. Never knew that until I started writing this.

I use this expression a lot, but there’s not a weak link amongst that cast. Every one of them has been perfectly picked to play their part, and they do so wonderfully. Jeter especially is a stand out as Eduard Delacroix, a French prisoner who receives the brunt of Percy’s ire, but also feels the joy of caring for the prison’s unplanned pet, Mr. Jingles the mouse, who is all kinds of adorable. Jeter is an actor I’ve always kept an eye out for since first seeing him in an underused role in the largely terribleJurassic Park 3, and seeing him get a meaty role here, where he gets a full arc, lots of screen time and a first and last name is a welcome rarity.

Hanks however is the star of the show. He’s always been such a great everyman, and he continues to do so here. The real performance that everyone comes for though, is Michael Clarke Duncan. Prior to The Green Mile, Duncan’s only role that wasn’t some variations on “Bouncer” or “Big Mike” was as Bear in one of my guilty pleasure movies, Armageddon (with another cavalcade of character actors). In fact, Bruce Willis was so impressed with Duncan on that film that he was the one who pushed Frank Darabont to cast him in this, so even if you hate Armageddon (which I can understand, but I still love it), you should at least be grateful that John Coffey came out of it. In Mile, Duncan played thoroughly against type. His deep, commanding voice had ensured him to always play figures in some kind of power, or with a tendency to threaten others, but here his size and imposing figure are needed to contrast against his character, but Duncan brings the goods performance-wise too. He sells the simplicity, makes you believe that someone so huge could be scared of the dark.

This is a world most of us are unfamiliar with. Aside from Coffey, there is no doubt that the men in the cells are vile criminals. They plead guilty, and know they have done bad things, accepting their fate. We don’t know what some of them did, but we know it must have been bad for them to wind up there, yet the guards who maintain them must work closely with them every day, getting to know these men whose deaths they will eventually carry out, and I find those interactions very interesting. The way the men see what they do for a living is very telling. Where Percy sees the prison as “A bucket of piss to drown rats in” and admits to only being there to be up front and involved with the killing of a condemned man before he plans to move on to a higher paying career, the likes of David Morse’s Brutal, a soft-spoken man who can be forceful when required, sees the job as a way of settling the score. He and the others are helping these men to make amends for the wrongs they have done, giving their life in penance, and it is his job to make the transition as smooth as possible. So when, during one execution, we see the family members of whatever victim was involved in the crime spitting bile at the condemned man and saying “I hope he’s scared, I hope he knows the fires of Hell are stoked for him,” Brutal and the others show compassion for a man they first met as a death row inmate, but whom they have gotten to know as something close to a friend, and at least someone with whom they have shared conversations, and gotten to know quite well in the time they’ve spent together.

Does it need to be so long? Probably not, but I don’t mind that much. It’s all very episodic in nature, dealing with events like chapters in the series of novellas this was originally published as. Paul is usually dealing with something to do with either John, Percy or Bill, despite most of the events taking place within the confines of the cell block, but all these storylines converge at the end with something inevitable, satisfying, yet wholly devastating. I imagine it will be a while before I watch it again, but that’s more due to the mountains of other things I have to watch. It is a wonderful, enjoyable yet endlessly moving film that deserves more people to see it, and much more praise.

1 thought on “The Green Mile”