During the preparations leading up to the public unveiling of three products – the Mackintosh in 1984, NeXT Computer in 1988 and iMac in 1998 – business “composer” Steve Jobs (Michael Fassbender) deals with the same handful of people and problems, including his friend and marketing associate Joanna Hoffman (Kate Winslet), co-Apple-founder Steve Wozniak (Seth Rogen), engineer Andy Hertzfeld (Michael Stuhlbarg), Apple CEO John Sculley (Jeff Daniels) and Chrisann Brennan (Katherine Waterstone), Steve’s ex-girlfriend and the mother of his potential daughter Lisa.

Steve Jobs was never a figure I paid a great deal of attention to. I’ve tried not to buy into the Apple religion, but alas I am the owner of an iPhone and iPod, and my partner has a Mac and iPad. I’ve hated pretty much every phone I’ve used, regardless of make or model, but I’ll admit my latest life-absorber is probably the one I’ve hated the least, so credit where it’s due, I suppose. As such I’ve never really seen or been overly aware of Jobs’ life and history, I’m pretty sure I’ve never even watched a video of him, with my only connection being a hazily remembered viewing of The Pirates of Silicon Valley when I was in hospital a few years ago following a nose operation. Therefore, when the announcement was made that Michael Fassbender would be playing Steve Jobs (I haven’t seen, and do not ever intend to see the Ashton Kutcher version), I had no opinion of the casting other than “I like Fassbender, I’ll probably track that down sometime”. And given it co-stars Kate Winslet, obviously I’d review it, and given this month over on the LAMB the Director of the Month is Danny Boyle, this seemed the perfect opportunity.

Recently there has been a trend of taking the notion of a biopic and really focusing it down on a concentrated aspect of the subject’s life. Take Spielberg’s Lincoln, which looked at just the last few months of the president’s life, or Ava DuVernay’s Selma, which boiled down everything Martin Luther King Jr. did to focus on one specific march. Both films are all the more impactful for their limited approach, and the same can be said for Steve Jobs. Instead of playing out the man’s life story, we see very clearly defined chapters in his life, which provides enough insight to build a history and persona to this man, whilst also educating on at least three of his life’s major events. The notion that everything happening in the film actually occurred in the 30-40 minutes leading up to each event is beyond ludicrous but that’s not the point. It’s a directorial choice, or a script-writer’s choice, potentially both (equal credit to Danny Boyle and Aaron Sorkin), and it works very well. 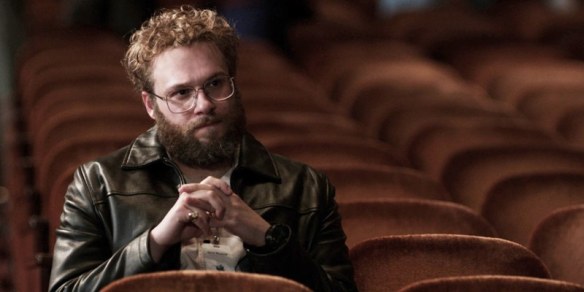 So what of the man? Well before watching I knew that whilst he was well regarded by fans, those close to him found Jobs to be somewhat difficult to work close to, and that comes across here in spades, but never feels like he – or anyone else – is a caricature. Sorkin’s script is packed with his usual hyper-intellectual barbs and thinly veiled put-downs, yet it’s a testament to all involved that despite how negatively Jobs may be portrayed, the positive aspects of his vision and intentions comes through. He has an image in his head of this futuristic device that’s so great the general public cannot even fathom how much they’ll love it because they’re on a different level of imagination to Jobs. All he wants to do is open their eyes to this creation; in his own words: “They won’t know what they’re looking at or why they like it, but they’ll know they want it … People don’t know what they want until you show it to them.”  As an engineer myself it’ll be no surprise to learn that the discussions regarding the development of products to the market were an element of the film I keenly paid attention to, and they didn’t disappoint. Michael Stuhlbarg’s put-upon engineer Andy Hertzfeld was the character I most empathised with, for reasons that would be obvious to anyone who’s witnessed some of the requests I’ve had to deal with in my day-to-day work life.

Some of the dialogue feels like collections of buzz-lines and trailer excerpts which, in context with the rest of the film, don’t really seem to mean a great deal, slot in alongside monologues that feel overly scripted and not at all realistic, but that’s what you get with Sorkin, and whilst it might annoy others, I’m down with everything the man has ever written (so far we’re up to season 3 of our West Wing re-watch). Also I think I got a little lost at a few points where I’m so unfamiliar with the subject matter – I’d never even heard of the NeXT Computer before this screening – so I’m pretty sure I’ll appreciate the script even more on the second go around. Speaking of the NeXT, it’s segment, the central third of the film, is perhaps the weakest, suffering from middle-trilogy syndrome in that it gets none of the establishing, none of the pay-offs, just a continuation of what has been introduced before with few satisfying elements – think The Two Towers, but without the giant Ent/orc battle – but fortunately the expertly crafted first and last segments more than make up for the central lull.

So, if like me you’re incredibly unfamiliar with Jobs and his legacy, this film will educate you a great deal, but is also interesting and enjoyable if you don’t care about the man.