Georges and Anne (Jean-Louis Trintignant and Emmanuelle Riva) are a couple of retired music teachers in their 80s, who live alone together in their apartment. Their peaceful existence is shattered when Anne suffers a stroke, and her condition only worsens, but Georges promises to never send her back to the hospital, and instead attempts to care for her himself in their home. 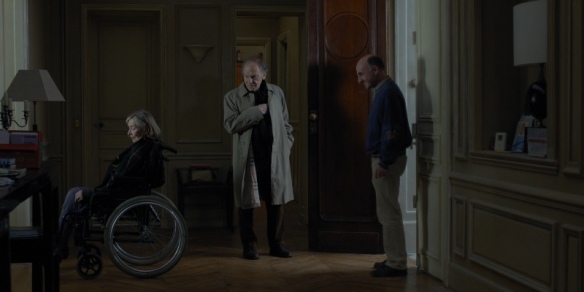 END_OF_DOCUMENT_TOKEN_TO_BE_REPLACED

One cannot deny that this is an excellent, well made film by director Michael Haneke about a pre WW1 German village suffering from seemingly random acts of terrorism – the doctor’s horse is tripped on his way home from work, a barn is burned down, a woman dies when some rotten floorboards give way beneath her. Yet viewing is not a satisfying experience, as our narrator, speaking from the future about years long past, seems reluctant to release all the details of his story. The children of the village are severely mistreated by the pillars of their community, namely the pastor, doctor and baron. The pastor labels them with the titular white ribbon for the smallest offence, and when his pubescent son admits to self gratification; his hands are tied to the posts of the bed when he sleeps, to prevent any further sinning. It is obvious from the start that the children are behind the village’s incidents, having formed a kind of gang, yet these suspicions are never fully confirmed, with the most validation provided by a character approaching a bird’s cage holding a blade, and then the bird later found dead. Though Haneke has made a living from ambiguous works, some of his other features – Hidden or Funny Games for example – are superior to this in that you feel you have been told at least most of a story, rather than excerpts from a couple of chapters.