This is one of those weeks where I’ve not got anything to say other than the usual lamentations on my lack of progress or the woes of international podcasting, so instead I’m going to highlight a podcast I’ve started listening to recently that you might like. I don’t watch a great deal of TV, but one of the few shows I’ve not only seen in its entirety but have revisited at least once is The West Wing, and one of its latter-season stars, Joshua Malina (he played Will Bailey), has recently begun a podcast called The West Wing Weekly, which he hosts alongside Hrishi Hirway, a self-proclaimed big fan of the show. On this show Joshua and Hrishi discuss an episode of The West Wing every week, in chronological order, occasionally with guests who were in some way involved in the TV show. So far they are six episodes in, and their guests have been Dulé Hill (who played Charlie Young), Janel Maloney (Donna Moss) and Eli Attie, a writer/producer who was also Al Gore’s chief scriptwriter. Whilst I’ve never been terribly interested in politics, especially that of another country, and one that seems to become more of a literal circus every year, my love of The West Wing stems from the characters, their interactions, relationships and dialogue. I discovered the show after watch Aaron Sorkin’s follow-up, Studio 60 On The Sunset Strip, which was criminally cancelled during the first season, and remains one of my favourite shows ever, one season or not. When I was denied further episodes, I sought out the next best thing. After recently lending the whole boxset to a friend, who returned all seven seasons in a matter of weeks, my partner has also shown an interest so I’m introducing her to the show whilst re-watching it myself, and at one-a-week it shouldn’t be too hard to keep up with the podcast.

Anyway, enough of TV, here are the films I watched this week:
END_OF_DOCUMENT_TOKEN_TO_BE_REPLACED

Whilst attending a carnival, well-to-do surgeon Mr. Treves (Anthony Hopkins) sees John Merrick (John Hurt), a 21-year-old man born with such severe physical disfigurements that he is displayed as “The Elephant Man”. After Merrick receives another in a series of beatings from his “owner” Bytes (Freddie Jones), Treves takes Merrick into the hospital and cares for the man, slowly uncovering the person behind the appearance.

END_OF_DOCUMENT_TOKEN_TO_BE_REPLACED

Two boys, Alfredo and Olmo, are born within minutes of each other in January 1901. Alfredo is the grandson of landowner and family head Alfredo Berlinghieri (Burt Lancaster) whilst Olmo’s grandfather, Leo (Sterling Hayden), is a peasant and Alfredo Sr.’s foreman. The two boys grow up together, never forgetting their respective places within society and, once grown (into Robert DeNiro and Gérard Depardieu) they find themselves on opposite sides of a class struggle, exacerbated by the presence of fascist guards led by the new foreman, Attila (Donald Sutherland).

END_OF_DOCUMENT_TOKEN_TO_BE_REPLACED

I love podcasting, I really do. Recording the weekly Lambcast is amongst the highlights of my week, even when the calls drops a dozen times and Skype needs everyone to update at varying points during the show, I still love doing it. So much so that I often think about starting new podcasts. I think it’s a common issue once you’ve caught the podcasting bug, and the trick seems to be keeping that desire contained and constantly reminding oneself that there’s just not enough time in the day. Fortunately I’ve never been one to let my desire to do something have any impact on whether I’ll do it or not. If I could though, oh if I could. I’d podcast for a living if I could make it work. I’m particularly a fan of the Movie Minute podcast format, wherein films are looked at a minute at a time on a daily basis. So far I’ve listened to Star Wars Minute (Episodes 4–6, currently nearly finished The Phantom Menace) and Goodfellas Minute, and I’m 40+ minutes into Back To The Future Minute. Gutterballs looks at The Big Lebowski a minute at a time, always spending well over an known looking at each minute with the various tangents that come along, and they don’t release that on a daily basis (they’ve been going since 2012 and haven’t finished yet) so I’ve not listened to much of that one just yet. Obviously I’d love to start Jurassic Park Minute. I think about this often, daily sometimes. But I just do not have the time. As with Star Wars and Back to the Future, the plan would always be to move onto the sequels, and as much as I dislike Jurassic Park 3 I’d still love to spend months really digging into my problems with it and trying to find positives. And once I’d finished Jurassic World Minute I’d move on to something else. Probably Pixar Minute, starting with Toy Story Minute and continuing right through them all, even Cars 2 Minute.

The other show I’d love to do, and this is one that got closer to happening – we even recorded a jingle – is Jay and Robert Talk Time Travel (JARTTT). The jingle was the title, sung to Troy and Abed in the Morning from Community. This would have been a show recorded every 2 weeks, looking at a different time travel movie each show. My co-host would have been Robert Zerbe from To The Escape Hatch, who was my co-host for a spell over on the Lambcast. He and I both obsess over time travel movies, and there’s a heck-load of them we could talk about, from Primer to Looper through Teenage Mutant Ninja Turtles 3. Again, it’ll never happen, at least not whilst I’m hosting the Lambcast and running this blog. Sometimes I think I’d have just about enough time to stay on top of everything if I dropped the blog and the podcast. That might give me a chance of keeping the dog walked and fed, house tidy, DIY in hand, garden in order and possibly even allow me the chance to go for a run now and then and go out once in a while. Instead all of the above, including the podcast and this blog, receives a rotating degree of being ignored every now and then. Such is my life. Anyway, here’s what I’ve watched this week:
END_OF_DOCUMENT_TOKEN_TO_BE_REPLACED

Don Vito Corleone (Marlon Brando) is the head, or Godfather, of his family and crime syndicate in 1940s New York. He receives a request to move into narcotics by up-and-comer Sollozzo (Al Lettieri), but when Vito declines, the Tattaglia family, with whom Sollozzo is in business, attempt to kill Vito and break the Corleone family apart. With Vito in hospital, it is up to his children – headstrong firebrand Sonny (James Caan), simple Fredo (John Cazale), newly married Connie (Talia Shire), war veteran Michael (Al Pacino) and adopted Tom (Robert Duvall) to resolve matters. 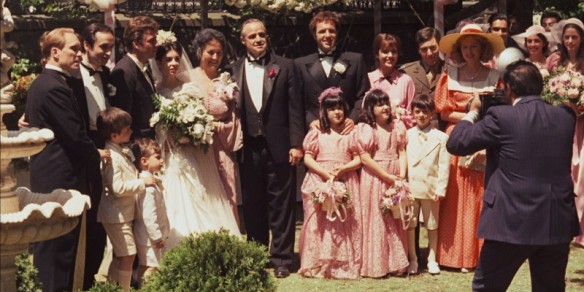 END_OF_DOCUMENT_TOKEN_TO_BE_REPLACED

After an upper class dinner, the hosts and guests all adjourn to the parlour for after-dinner drinks and discussions. When the hour becomes late, the guests all decide to stay instead of heading home, sleeping on chairs and the floor instead of to some of the numerous bedrooms. Come the morning, still none of them leave, and they soon begin to wonder if perhaps there is some unseen force keeping them retained within the room.

END_OF_DOCUMENT_TOKEN_TO_BE_REPLACED

Yep, I’m still behind on everything. Nope, it doesn’t look like I’ll be catching up any time soon. Yep, it’s starting to annoy me. Here’s what I watched this week:
END_OF_DOCUMENT_TOKEN_TO_BE_REPLACED

When their mother passes away, three very different brothers return to their family home to pay their respects, but their opposing lifestyles and outlooks on life cause them to clash.

END_OF_DOCUMENT_TOKEN_TO_BE_REPLACED

Watching so many films I sometimes find myself going through completely unintentional themed periods, often discovered after the fact. For example, a lot of films I’ve watched recently have featured Italian or Italian-American families with lots of brothers in, and these all arrived to me through different means. Brooklyn cropped up on my LoveFilm list and got dispatched immediately. Then Rocco and His Brothers needed reviewing for Blueprint: Review. And this past week I’ve watched Three Brothers, also for Blueprint: Review, and I watched The Godfather for this weekend’s Lambcast. Even more bizarrely, the past few weeks have seen not one but two films in which someone submerges themselves in a large quantity of grain (Three Brothers and The Dressmaker). Weird. Anyway, here’s what I watched this week:
END_OF_DOCUMENT_TOKEN_TO_BE_REPLACED

Two days ago, singer Cléo (Corinne Marchand) underwent some tests to determine if she has stomach cancer, and how bad it is. She is scheduled to visit the hospital at 7pm, in two hours time, so whiles away the inbetween hours wandering the streets, first having her fortune told before going to a cafe with her maid (Dominique Davray), having a meeting with two musical collaborators (Serge Korber and Michel Legrand) spending time with a friend (Dorothée Blanck) before meeting a soldier (Antoine Bourseiller) in the park and eventually making her way to the hospital to receive her results.