This has been a really unproductive week in terms of me watching and writing about movies. As in, I only saw three, and wrote about a different three. Needless to say, my weekly tally is not going well. I have, however, been watching a lot of 30 Rock, so there’s that. I’d seen seasons 1 and 2 before, loved them, but never watched any further for reasons, presumably, but I got the 7-season boxset for Christmas and have been working my way slowly through. How slowly? Well this past week I finally reached series 2. Yep. So I’ve yet to break new ground (I’m up to the episode where Tracey Morgan says something loud and stupid), but I’m still really enjoying it. What I hadn’t noticed before, however, was just how heavily scored the whole thing is. As in, there are times when I can’t hear the dialogue because the music is just too damn loud. It’s like Interstellar in there.
END_OF_DOCUMENT_TOKEN_TO_BE_REPLACED 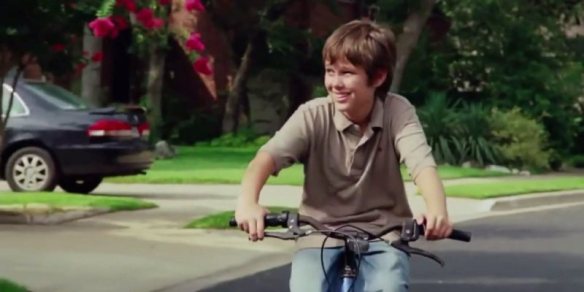 END_OF_DOCUMENT_TOKEN_TO_BE_REPLACED

The self-styled Goonies are a group of kids – Mikey, Mouth, Chunk and Data – who find their childhoods in jeopardy when a golf course is scheduled to be built in place of their homes. Days before the final contracts are to be signed by their parents, the kids find a treasure map in Mikey’s attic and, accompanied by Mikey’s older brother Brand and girls Andy and Stef, the kids set out in search of the treasure that could save their homes. However, the villainous Fratelli family have just busted one of their number out of prison, and they stand in the kids’ way. 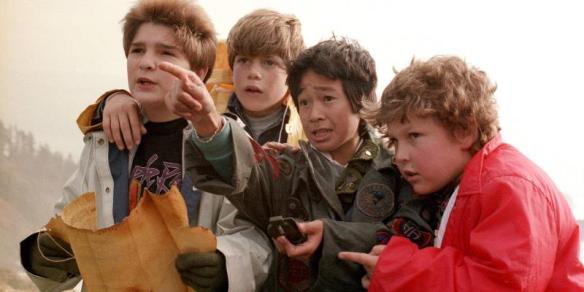 END_OF_DOCUMENT_TOKEN_TO_BE_REPLACED

If Spielberg’s vision for War of the Worlds ever comes true, I know what my role would be. I don’t think I’d be amongst the masses incinerated in the early onslaught (chances are I’d be inside, not knowing what was going on until at least days later), but I’d probably get caught in one of those big cage things on the tripods. Don’t worry though, because I’d be the guy who first infects the aliens with the common cold. Consider me the sacrifice that saves humanity. I’m fine with that. You see, somehow, we’re only 7 weeks into the year and I’m already on my third cold. Third! What the heck happened to my immune system? Also, Aisha watched War of the Worlds last night (I only caught glimpses, so it doesn’t feature in this post as an official watch), and bloody hell is Tim Robbins creepy in that film. Here’s what I watched this week.
END_OF_DOCUMENT_TOKEN_TO_BE_REPLACED 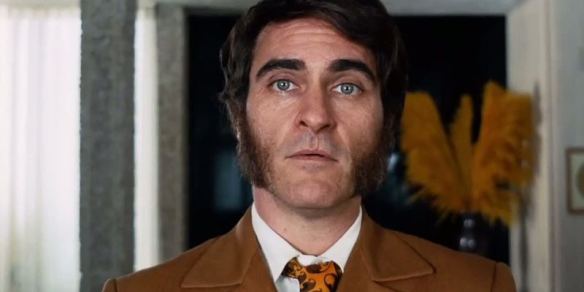 END_OF_DOCUMENT_TOKEN_TO_BE_REPLACED

Freddie Quell (Joaquin Phoenix)is a former U.S. seaman, suffering from some kind of Post Traumatic Stress Disorder that leaves him unable to function in civil society, and sees him perpetually fleeing the situations he finds himself in. One such escape attempt sees him stow away on a party boat that is commandeered by Lancaster Dodd (Philip Seymour Hoffman), a visionary, philosophical leader, who takes a shine to Freddie and invites him to join their program, along with Lancaster’s wife Peggy (Amy Adams) and the rest of their family (Jesse Plemons, Ambyr Childers and Rami Malek). However, the program’s gruelling processing scheme may be too much for Freddie to take, and he must decide for what benefit is it all for, anyway? 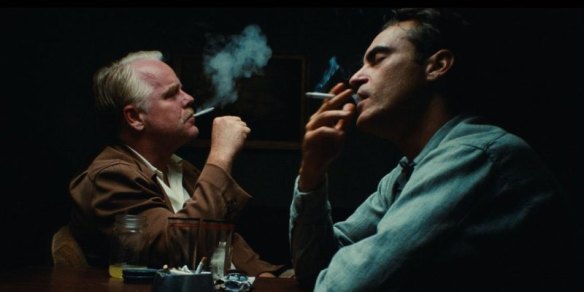 END_OF_DOCUMENT_TOKEN_TO_BE_REPLACED

Daniel Plainview (Daniel Day-Lewis) is something of an oil man. At least, he will be eventually. He starts out as a silver prospector in New Mexico, uncovering a seam and gradually building himself a small company. One day, he is approached by Paul Sunday (Paul Dano) who believes there is oil on his family’s land. Plainview, now with his adoptive son H.W. (Dillon Freasier) and his crew, including right-hand man Fletcher (Ciarin Hinds) head to the Sunday ranch, where Daniel plans to make his fortune. 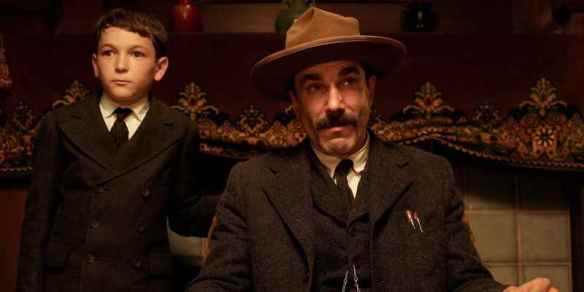 END_OF_DOCUMENT_TOKEN_TO_BE_REPLACED

I feel like this has been a wasted week. You see, like a lot of my fellow movie bloggers, I have a partner who doesn’t quite share my affinity for cinema. She likes films, sure, but not necessarily the same ones I do, so whenever she goes away for a few days I like to catch up on some foreign, old, horror or just plain weird movies that she might not necessarily appreciate. This past week Aisha went away for a couple of nights, and I most certainly did not make good use of this time alone. One night was spent editing a particularly long episode of the Lambcast, devoted to the work of Paul Thomas Anderson (link below, it clocked in at a little over two hours despite no Rants/Raves/game) and Thursday was a particularly stressful day at work, so I needed a decompression evening, which was spent in the kitchen making cannelloni and marshmallows (not mixed together, that sounds vile). Both dishes turned out quite well (I’m told, I don’t actually like marshmallows myself, they were for the aforementioned departed partner), but it meant a whole two evenings were spent without watching any films or writing any reviews. So damn. Also, I flat out failed my solid week of Paul Thomas Anderson reviews, only managing to write three, and with three more still to go. Damn again. If it helps at all, I’ve got posts for There Will Be Blood, The Master and Inherent Vice saved in draft, with all the images, I’ve just not written more than a sentence between them. Maybe this week, ey?
END_OF_DOCUMENT_TOKEN_TO_BE_REPLACED

Barry Egan (Adam Sandler) is a little bit different. He runs a plastic plunger company with his business partner Lance (Luis Guzman), and is constantly being hassled by his seven sisters, who belittle him and essentially ruin his life at every turn, as they have his entire life. One day, a harmonium (kind of like a small piano, I’d never heard of them before) is dropped outside the industrial estate on which he works, and shortly afterwards a woman named Lena (Emily Watson) shows up too. Then some more stuff happens involving a phone sex line and an awful lot of pudding. 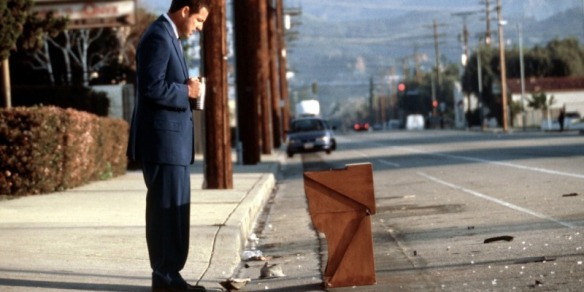 END_OF_DOCUMENT_TOKEN_TO_BE_REPLACED

In the San Fernando Valley, a selection seemingly disconnected group of people are going through some fairly heavy moments in their live. Earl Partridge (Jason Robards) is dying in bed, being cared for by his nurse Phil (Philip Seymour Hoffman), who is tasked with finding Earl’s estranged son. Earl’s much-younger trophy wife, Linda (Julianne Moore), is struggling to deal with the imminent death of her husband. Officer Jim (John C. Reilly) is called to investigate a disturbance, which leads to a potential murder case. Stanley Spector (Jeremy Blackman) is a genius child contestant on the TV Game Show What Do Kids Know?, and is just a few days away from breaking that show’s record of most consecutive wins. Jimmy Gator hosts the show, and has done for decades, but has just been diagnosed with cancer, with just months to live. Jimmy’s daughter, Claudia (Melora Walters), has a difficult relationship with her father, as well as a cocaine habit and various other issues in her life, whilst Donnie Smith (William H. Macy), a former child star contestant on the aforementioned TV show, has seen his fame squandered and life thrown in turmoil when he loses his job at an electronics store. Finally, Frank T.J. Mackey (Tom Cruise) runs a self-help seminar on men who wish to be more successful with ladies. Mid-show, he gives an interview to a reporter (April Grace) that doesn’t necessarily go as he plans. All these stories, and more besides, will become interwoven over the course of the film’s next 24 hours. 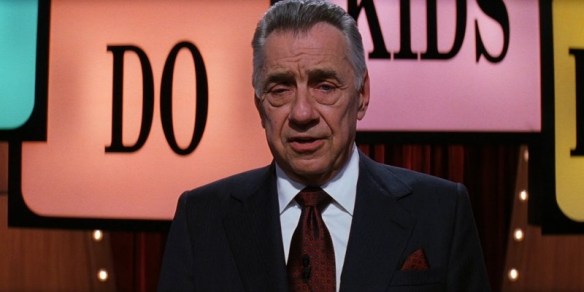