This is going to be tough. Tomorrow is the first day of December. 25 days until Christmas, 31 days until the end of the year, and I’ve got a heck of a lot still left to do to meet my goals for the year, and that’s without taking into account everything I need to do in real life for this time of the year. There’s just four weekends left until 2016, and I’ve got four Road Trip posts left to write for FTS, so that’s one a week, no option. The only problem is I haven’t watched any of them yet (we got about 10 minutes into Garden State for New Jersey and had to bail about a week ago, and I’ve been unable to bring myself to turn it back on again since.). Add to that 14 nominated movies, 2 “Bad” movies and a bunch of others I’ve watched but not reviewed yet, and it works out that I need to watch 17 and review 26 all in the next month. Jeez. 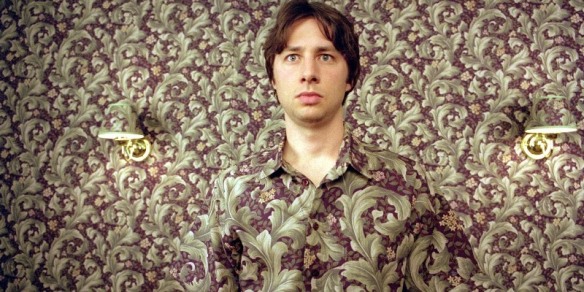 On the plus side, however, this week has seen me all but complete another goal, to watch 59 movies released in the UK in 2015. Granted I’m only at 58 as of typing, but I’ve already got my ticket booked for Star Wars: The Force Awakens, so this goal is in the bag. That, and San Andreas has just been dispatched from LoveFilm, so I’m going above and beyond with this little chestnut. As for those other as-yet-uncompleted goals? Well I guess I’d better stop prattling on here and get back to writing a review or two. I’m all-to-aware that after Christmas I’ve got three days at home alone whilst my partner is at work, so I’m anticipating a deluge of watching and writing taking place then, but given how poorly past plans have turned out, there’s no guarantee. Here’s what I watched this week: END_OF_DOCUMENT_TOKEN_TO_BE_REPLACED

Carl Denham (Robert Armstrong) is a film director, planning to make a moving picture on Skull Island, a mysterious land in uncharted waters, to which Denham has obtained a map, but he is short one lead actress. Scouring New York he finds penniless Ann Darrow (Fay Wray), and convinces her to take part before whisking her away and setting sail along with first mate Jack Driscoll (Bruce Cabot) and a large crew. On the way to the island, the crew become wary of the legend of the great Kong, a mythical beast who, upon arrival, turns out to be a giant gorilla worshipped and rightfully feared by the native tribesman on the island. When the natives kidnap Ann – blondes being something of a rarity to them – and offer her up to the beast, he takes her back to his lair, prompting Jack, Carl and the rest of the crew to attempt a rescue mission. 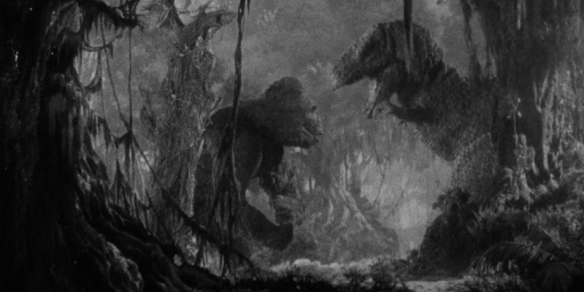 END_OF_DOCUMENT_TOKEN_TO_BE_REPLACED

I listen to a lot of podcasts. A lot. I’d estimate I spend about 7 hour of each working day listening to them, with an additional hour or so in the morning and evening before work, walking the dog and such, so I get in a lot of listening. I’m subscribed to maybe 30 or 40 shows, most of which are film-related and most of which I try to listen to every episode of, postponing the occasional few until I’ve seen the specific films in question, but there was one show, one that’s not film-related, which I’d heard a great deal about last year but never got around to listening to until this past week, and that show is Serial. 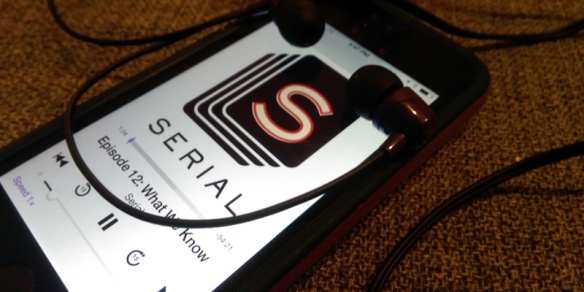 If you’re unfamiliar, the first season of Serial, released last year in 2014, was a twelve-part show documenting the re-investigation of a reporter, Sarah Koenig, looking into a murder trial from 1999 in Baltimore, Maryland. A man, Adnan Syed who in 1999 was _ years old, was convicted of the murder of his ex-girlfriend Hae Min Lee, but always denied the charge. Koenig was contacted by Syed’s family. who fifteen years later were still adamant of his innocence, and after a little digging Koenig found some interesting inconsistencies within the evidence of his case, prompting her to re-evaluate every morsel of information from the case. I downloaded the show when it gained popularity, but knew its serious content deserved my full attention. Last Friday I found myself at work trudging through a fairly monotonous task, so I decided now was finally Serial’s time. I marathoned six shows that day, and the latter six earlier today. Clearly, from the off I was hooked.

The case was fascinating, and it was truly interesting just listening to how the proceedings took place, how the evidence was gathered and the cases built. Too often I assume the depictions shown in films and TV are overly dramatised, and for the most part they are, but listening to this true life documentation I got a far greater insight into how these kinds of cases are really handled. I’d hoped for a more satisfying conclusion, but it was still a highly informative and gripping listen, and I’m very much looking forward to the next series, whenever that may come. Now, onto what I watched this week:
END_OF_DOCUMENT_TOKEN_TO_BE_REPLACED 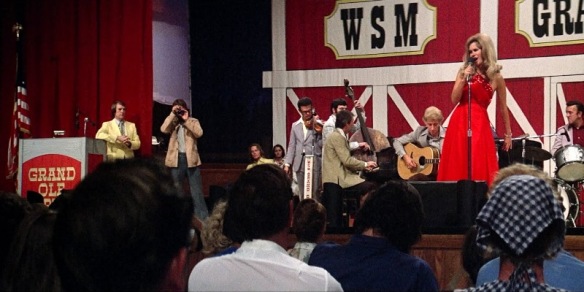 END_OF_DOCUMENT_TOKEN_TO_BE_REPLACED

According to Wikipedia, Chris Marker’s Sans Soleil (literally translating as “Sunless”) is ” meditation on the human nature of memory,” so it seems only fitting how little I can remember of this film. As such this a review I’ll be writing more to cross it off than to say I’ve seen it, as what little I can recall is not something I wish to experience again. 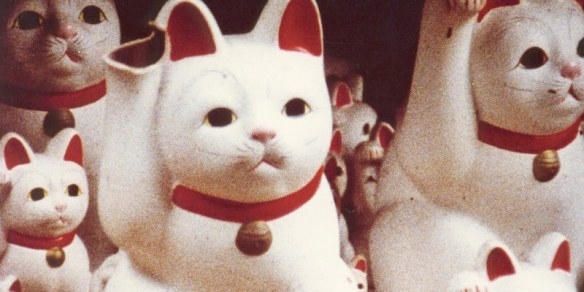 END_OF_DOCUMENT_TOKEN_TO_BE_REPLACED

I was all set to regale you this week with my latest arduous tale of woe. This past week I suffered a loss so fraught, so traumatising, that I found myself at a loss with what to do with myself. I wandered from room to room, occasionally looking forlornly into the far distance as if momentarily considering some past lover or long forgotten moment from my youth. I’d sign, subtly shake my head a little then proceed with my day, knowing part of me was missing, out there, in the great wide world.

And then I found my lost notebook, and everything was fine. It had the notes I’d made on some of the overdue reviews I’ve yet to write (The Wages of Fear, Traffic, A Little Chaos, La Jetee and Sans Soleil, to be exact), and in the upheaval required to redecorate our guest bedroom/my podcasting lair it had gotten lost in the shuffle, but low and behold if it didn’t turn up under a pile of other notebooks. Who’d have thought? Anyway that’s why today’s review of Koyaanisqatsi went up a little late, as I’d intended to write a few more reviews over the weekend but only found the notebook last night. Champagne all round.

The aforementioned redecorating has severely limited by cinematic intake this week, but I did watch a few things. Here they are:
END_OF_DOCUMENT_TOKEN_TO_BE_REPLACED

What’s that? I’m supposed to write a plot synopsis for my opening paragraph? Well I’d love to. I really would. I just can’t seem to find one around here. Nope, I’ve looked everywhere, I’ve got nothing, sorry. 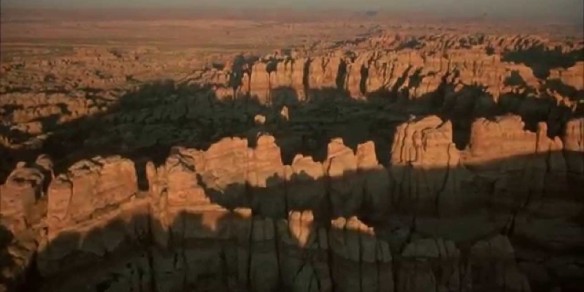 END_OF_DOCUMENT_TOKEN_TO_BE_REPLACED

This review was originally written as part of my USA Road Trip for French Toast Sunday.

British secret agent James Bond (Sean Connery) has been assigned a mission to investigate a gold smuggler, Auric Goldfinger (Gert Fröbe). However, as the investigation deepens and Bond becomes embroiled within the plot, Goldfinger’s plan leads to plans to break into the U.S. Gold reserve in Fort Knox. 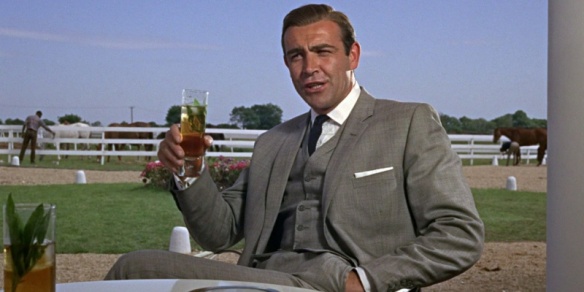 END_OF_DOCUMENT_TOKEN_TO_BE_REPLACED

Spending my time catching up on pending reviews (Three more crossed off! Twelve still to go!) has seen me watching less review-necessary films in an attempt to prevent the pending list from growing ever further. However, I still have those gaps in my week that need filling with audio-visual content, so I’ve been watching more TV. Not just new stuff, I’m catching up on some older shows too. Specifically I’ve started watching Parks & Recreation, a show I’d heard was good but had never gotten to, mainly because I don’t think it ever made its way to UK TV. I’m three episodes into series 1 so far, and I hop it gets better. I’ve heard that it’s from series 2 onwards that the show finds its feet, and at the moment the characters and situations have potential, but just need to settle into themselves a little more. I could also do with perhaps a little less Amy Poehler’s Leslie Knope, who so far comes off as more annoying than endearing, but there’s enough going on to make me continue with the series and move onto number 2 when the time comes. 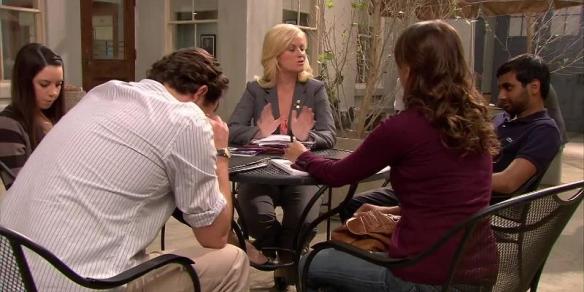 END_OF_DOCUMENT_TOKEN_TO_BE_REPLACED

The Freeling family – Steven (Craig T. Nelson), his wife Diane (JoBeth Williams) and their kids Dana (Dominique Dunne), Robbie (Oliver Robins) and Carol Anne (Heather O’Rourke) live in  a large house within the new-build residential community Steven works as a real estate agent for. They lead a normal life dealing with everyday family problems, but shortly after work begins on the digging of a new swimming pool they begin to experience strange goings-on within the house. Carol Anne is found talking to the television static late at night. Chairs being to rearrange themselves in the kitchen. The tree outside Robbie’s bedroom window seems more menacing than usual. Then one day, when Robbie’s tree attacks him, Carol Anne is left alone in her room and, when her family goes to find her, it appears she has been sucked through a portal in her closet. 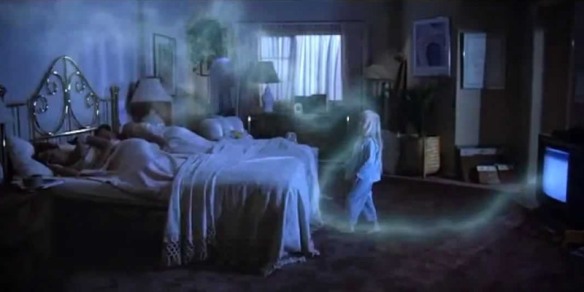