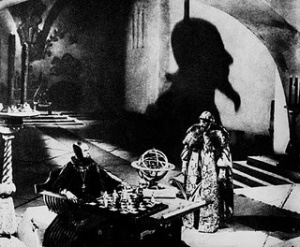 Oh dear God how many films about Russian history do I have to watch? Jesus I’m getting tired of typing about this, so you must be tired of reading this (I’m under the misapprehension that anyone is actually reading this. Or I’m talking to the voices in my head. But then why would I type that? Now I’m confused.). Our old friend Sergei Eisenstein (Battleship Potemkin, Alexander Nevsky, October) has been at it again, and fortunately I’veonly got one more of his films to watch now (1924s Strike, available to watch online at LoveFilm, yet I just can’t bring myself to do it yet). As I’ve said before, I don’t know anything about Russian history, nor do I really care about it, and I’m trying not to do any extra research to review these films, to help my ‘man of the people’ style reviews. I’m not going to recommend you watch a film that requires you to pass a history A-Level to a high degree beforehand.
So, in a nutshell, Ivan the Terrible tells the story of the man who united Russia in the 16th century. It was conceived as a trilogy, but Eisenstein passed away after making part two (I really shouldn’t be, but at least a small part of me is glad about this, although of course I’d have preferred he lived but just not made it, or anything else, ever again). The subtitles are difficult to read – white text on a light grey background – so much of the dialogue is lost, but I think he takes on the Russian leaders who opposed him, and the general people turn against him for going against God. There is a song including the lines “Sew a cloak of fox fur, trim it with beaver,” and the use of shadows is nice, with Ivan’s (Nikolai Cherkasov) distinct beard silhouetted against a wall, but the plot is dull and impenetrable without the aforementioned qualifications.
Choose life 3/10

Once again, as with Battleship Potemkin (also directed by Sergei Eisenstein), a greater understanding of Russian history probably would have made this film more appealing, and more likely to hold my interest. As it is, this tale of a 13th century Teutonic knight was lost on me, and I found the whole thing dry, dull and passionless. The titular Nevsky (Nikolai Cherkasov, a mixture of Charlton Heston and Richard Branson) is a fisherman and prince of his nation who raises an army of soldiers and peasants to fight back after his beloved homeland is attacked. In said army, two soldiers compete for the hand of a girl, with the man who shows the most valour being rewarded with her marriage, though it is not mentioned how she would make such a judgement when not present during warfare. The battle scenes are too long and stagey, with actors waiting for their opponent to take their turn as though playing Final Fantasy, and everyone on one side rides off at the shout of “We have won this day,” despite the battle being far from finished, with many soldiers on the opposing side still fighting. The good and bad guys are clearly marked – no prizes for guessing the men throwing screaming children into a fire with no morsel of remorse are going to be the villains, and there’s little to really recommend about this film, especially if you know nothing about eastern European history.