Brace yourself, this is probably going to be a long one.

I’m not a big believer in therapy. Or rather, therapy for myself. I don’t doubt that there’s a chance I’d come out the other side a more well-rounded individual, but I begrudge paying money for something I think I can work out on my own. A friend of mine goes once a month, and they think I should go, but money and time prevent it, as does my personal misgivings. I think I know what most of my problems are, and most of them are fine, I just need to stop beating myself up about them, and I’ve decided to use this week’s column as a little personal therapy. Read it, don’t read it, that’s fine. I just want to write this shit down. 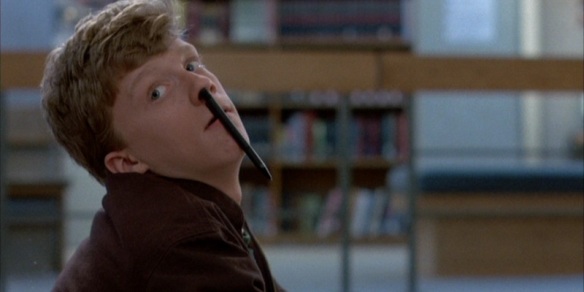 I don’t take compliments well. It’s something I’ve been thinking about a lot lately, in terms or pressure. Watching The Breakfast Club recently for the latest Lambcast on the films on John Hughes has made me contemplative about some things. I’ve discussed before, and mentioned on both that Lambcast and an upcoming episode of the Mad, Bad and Downright Strange Showcase that I deeply empathise with the character of Brian in The Breakfast Club, as played by Anthony Michael Hall. He is in the Saturday detention for taking a gun to school, with the intention of killing himself because he got an F in Shop class, and that’s a grade he can’t live with. I won’t go into too many details, but that’s something I can relate to. At school I got good grades pretty much across the board. I don’t count nonsense like P.E., because that’s not really a subject as much as it is ritual humiliation, but everything that could be considered academic was something I did well in. This wasn’t through luck, I wasn’t a gifted kid, I worked hard at my studies, spent most every evening up in my room doing homework, and I was even the kid who asked for more or voluntarily did extra, for reasons I’m not even sure existed. One English class required a few bullet points on a topic of some kind, and I remember writing a 6-page essay. And my lunch breaks weren’t spent outside playing, I was a pupil librarian, and when I wasn’t alphabetising or logging lendings, I was sat in the library, doing even more homework, because all that mattered was the grades. Good grades meant college. Good grades in college meant university. Good grades at university meant a good job, and a good job meant success. This was the route laid out in front of me, and there were no other paths available. Not getting good grades wasn’t an option. All those other kids around me who weren’t working every hour available knew some kind of secret I didn’t, something about some other way to progress in life regardless of these grades, but this was the only route I knew. So I studied. And I got the grades. I even won some awards, but nothing special. The problem was, the more good grades I got, the more good grades people expected me to get. I was always top of the class, especially in English and Maths, but now and then someone else would pip me to it, and there’d me a murmur around the room. People would look at me, some might even laugh. Whether this actually happened or not I can’t say. It’s likely it was all in my head, but even still I felt this pressure. This constant pressure that I wasn’t good enough. I’d got good grades before, so I must surely be capable of them again. By not maintaining a pole position I saw myself as letting people down, Disappointing my teachers, setting myself up for degradation and ridicule from my fellow students, and worst of all letting my parents down; there’s nothing worse than that.

Since school I’ve gradually settled into a life of mediocrity. There are few things I do that I even close to excel at, and that seems to be the key to not beating myself up. I’m at best satisfactory at my job. I’m at times above par as a boyfriend, but very much below par as a dog owner. I’ve recently taken up badminton, at which I’m enthusiastically crap, but I’m good at cycling and can sprint far faster than most people my size. I’m maybe in the top 10 refrigerator optimisers of all time, but my DIY skills are laughable. All in all, it runs to an average. I won’t appear in any history books for setting the world on fire, but I’m also unlikely to be executed for crimes against the royal family. On the theme park rides of life, I’m settled on the merry-go-round. With little achievement comes little expectation, and with little expectation comes little pressure.

So what does this have to do with my blog? I clearly don’t have any kind of prowess when it comes to writing reviews. My opinions on films tend to revolve around personal almost-anecdotes, snide remarks and discussions on what woodland creature an actor’s haircut makes them look like. I’m not trying to be a great writer, I no longer harbour the dreams of taking this to the big leagues and maybe one day earn a living writing about movies (truth be told, I have no aspirations whatsoever, which people close to me find infuriating, but I find refreshing and liberating). Granted, my lack of desire to make this a career stems from my certainty that I’m nowhere near good enough at it, and will never have the drive to become so. The problem comes when other people – that’d be you fine folk who, if you had any sense, would have stopped reading this long ago – leave me comments. I can’t remember the last time I wrote a review I was truly happy with, one that I’d be proud to have printed on that old papery stuff from the olden days, with my name at the bottom and a garish photo of me at the top, or at least some male model I’d paid to pretend to be me, because no-one wants to see my face anywhere. Yet sometimes people leave comments with the phrase “Nice review!” in them, or some such sentiment, and part of me, a very small part I try to hush, says “See, they liked it, you can write good stuff!” That’s a dangerous thought track to go down, and it’s never ended well. If I’m capable of writing good reviews, then every review can be good, so every review should be good, and I shouldn’t post a review until it’s as good as I can make it. This ends with me throwing my laptop at a closed window in frustration when I stare at a blacnk screen for four hours straight, unable to begin my next masterpiece.

Case in point, a few weeks Wendell, the glorious chap that he is, commented on one of these regular weekly posts saying it was his favourite so far. I was grateful for the sentiment, especially as it came from one of the more introspective of these posts – up until this one, that is. However, one week later I was staring at my screen wondering how to repeat the quality of the former week’s post. I had nothing. No ideas. No jumping off points. Nothing to do but post a photo of my velociraptor birthday cake and move on to prattle about sleep. The next week suffered the same fate, but found me making a contrary point to the previous week. I found myself buckling under the pressure to write something worthy of being read, and by an arbitrary midnight-on-Monday deadline. And then it hit me. Who cares? If a week goes by with nothing to say, maybe I should just say nothing? Get into the mini weekly film reviews and get out. Why am I stressing over something that by my own admission doesn’t matter? If my blog disappeared from the internet, the world would keep a-turning and you’d all use the time to find something better to read, I don’t doubt it at all. Hence why this didn’t get written in the dead of night yesterday. I had other stuff to do, some of which was sleep (I had an early start this morning and an expiring episode of True Detective to catch up on, expect my thoughts on series 2 once I’ve watched the remaining two episodes in the coming weeks) and when I went to bed I slept soundly, knowing nothing bad had happened due to my lack of posting a weekly post that doesn’t even go towards my blogging goals. Similarly, I remembered this morning that I hadn’t written my Blind Spot review for The Matinee’s monthly post, which goes out on the last Tuesday of every month, which just so happened to be today. I got something written, on JFK, but I missed the deadline by a few hours, and no giant anvil fell from the heavens to crush me. My keyboard did not explode. Ryan just added me to the list a little later, and my day carried on going.

That’s what I’ve come to realise – for me at least, this doesn’t matter. My blog is my hobby. I write film reviews because I want to. I want to get to the end of the 1001 List, and I want to review all the films on it, mainly so I’ve got a reference point for the future for all the films I’ve forgotten, which will be many, and already is lots. This isn’t about anybody reading my writing, although I’m grateful for those of you who do, I enjoy interacting with you all, and I can only apologise for the little I comment on your own sites, which also stems partially from my feelings of “Well that’s my opinion, but they won’t want to hear it.” I’m not going to stress over meeting my blogging goals. They’re an aim, and I’ll be a little disappointed if I don’t accomplish them all by the end of the year, but in the grand scheme of things, what does it matter anyway? Here’s what I watched this week: END_OF_DOCUMENT_TOKEN_TO_BE_REPLACED