After a crew of thieves – including two corrupt cops – partially botch the robbery of a bank’s safety deposit box for Russian gangsters, the team are given another chance and their fee is withheld until she successfully steal more information, key to the release of the gang’s boss. The only way to pull off the heist is to distract all the local cops long enough for a decent window of time, and the corrupt officers Marcus (Anthony Mackie) and Franco (Clifton Collins Jr.) believe the best way to do this is to pull a “Triple 9”, to kill a cop. And they think they’ve got the perfect target in Marcus’ new greenhorn partner Chris (Casey Affleck), the nephew of prominent Detective Sergeant Jeffrey Allen (Woody Harrelson). Meanwhile, the thieves’ leader Michael (Chiwetel Ejiofor) receives grief from the Russian boss’ wife Irina (Kate Winslet), whose sister (Gal Gadot) is the mother of Michael’s son. The rest of Michael’s team is comprised of Russell (Norman Reedus) and his younger, unstable brother Gabe (Aaron Paul). 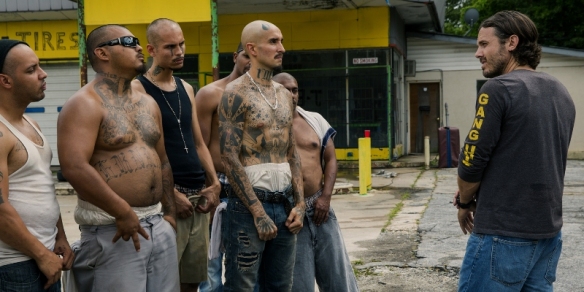