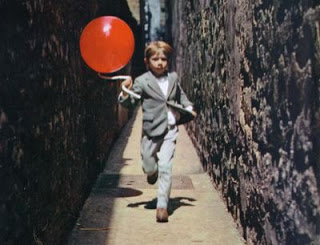 A woman went out walking one day and discovered a snake’s egg on the path. She took the egg home and cared for it until it hatched, when she kept the snake as a pet. She doted on the snake for years, attending to its every need and treating it better than any snake had been treated before. Then, one day, the snake bit the woman, and with her dying breath she asked the snake “Why?” and the snake replied “Bitch, you knew I was a snake.”
It is this sense of inevitability and apprehension that fills the Red Balloon, as beautiful and well crafted as it is, that almost ruins the short about a boy who befriends a bright red balloon, but finds owning it proves problematic when all the other children want it as well. Yet however destined the ending may seem, it is the journey up to it, and indeed the repercussions that make the film so endearing, at times unexpectedly hilarious and beautifully heartwarming, especially the moment the balloon encounters an equally bright and vivid blue inflatable friend of a young girl. The ending, too, is truly uplifting.
Choose film 9/10