100th film! Although really I’d have preferred it to have been the 50th, seeing as it’s about a bus, rigged with a bomb that activates once the bus reaches 50 miles per hour, detonating should the buses speed drop below 50. The planter of the bomb is Dennis Hopper’s vengeful psychotic ex-cop Howard Payne, angry at Keanu Reeves and Jeff Daniels’ foiling of his first elevator-based hostage situation and eager for a paycheck he feels he’s been cheated. But you don’t care about the motive or who’s behind it, as Payne tells Reeves’ Jack Traven, “Your concern is the bus.” Whenever the film detracts from this central conceit, be it following the non bus bound cops trying to track down Payne or Hopper himself watching the action unfold on the ever present media, the pacing immediately slackens, so enticing is the central plot.
END_OF_DOCUMENT_TOKEN_TO_BE_REPLACED 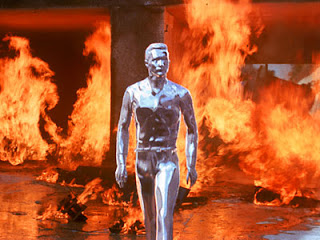 How do you make a sequel to Terminator? It seems like the perfect movie to create a franchise with, featuring the possibilities for labyrinthine time-travel plotting, self referencing paradoxes and a villain who can be killed, but can also always return, but therein lays the biggest stumbling block. The villain from the original, Schwarzenegger’s unstoppable mechanical monster, the main draw of the first film, surely must return for the second, especially seeing as, in 1991, he was one of the biggest stars in the world. But how could the same robot come back as the villain? The sequel must somehow build upon the original, develop it further, else why bother? Having the same villain, with essentially the same plot, would seem a waste of time. So, proving that necessity is indeed the mother of invention, director James Cameron pulled a full character flip on not just Arnie’s T-800, now here as protector rather than foe, but also of Linda Hamilton’s Sarah Connor, discarding the ditzy 80s hairdo for some badass fighting skills, tank tops and a permanent ticket to the gun show. The introduction of John Connor (Edward Furlong) as a ridiculously irritating teenager spouting laughable phrases (Asta-la-vista, baby? Seriously?) is also a diversion from the expected, as he’s the so-called saviour of mankind, but he’s so goddamn annoying that whenever he was onscreen I found myself rooting for the bad guy.
END_OF_DOCUMENT_TOKEN_TO_BE_REPLACED