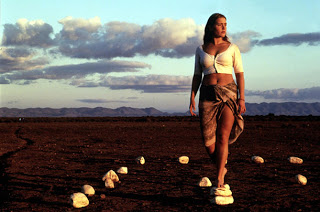 Hurrah, another Jane Campion film. I can’t say I was much of a fan of The Piano, so I wasn’t much looking forward to this, the next available film featuring Kate Winslet (Hideous Kinky and Faeries are as yet out of my reach).

Winslet plays Ruth, a young Australian girl (with a distinctly English accent) who has travelled to India to find herself. As well as finding that, she discovers and becomes willingly entangled in a mass marriage/suicide cult, and her understandably concerned family would rather she just came home. After Ruth’s mother (Julie Hamilton) manages to persuade her daughter to come back to Sydney with her, utilising a fake illness for her father and a very real asthma attack for her mother, the family bring in P. J. Waters (Harvey Keitel), a professional ‘exit counsellor,’ an expert at convincing people to give up their new found cultish beliefs and return to their previous lives.
END_OF_DOCUMENT_TOKEN_TO_BE_REPLACED