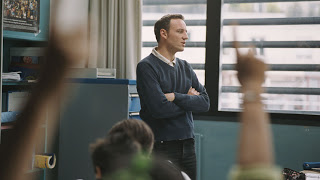 Filmed in a real school (and mostly in a real classroom) with an unprofessional cast all playing versions of themselves, Laurent Cantet’s semi-improvised near-documentary follows Mr. Marin (François Bégaudeau), a French teacher at an inner city school as he tries to connect with, further and inspire a class of 13-15 year olds. Bégaudeau co-wrote the script, and stars in his first acting role essentially playing himself, for he used to be a teacher, so it is no surpirse that his performance is wonderfully naturalistic, as are those of the multi-cultural students he presides over.
It is impossible not to feel the frustration felt by Marin, as he does his utmost to help his students, who almost seem to repell any learning, yet even when the other teachers have given up on the more problematic pupils, Marin still endeavours to find ways to reach them.
If this all sounds a little Dead Poet’s Society or Dangerous Minds, fear not. Here there are no last reel acts of defiance or obligatory contests won, life simply goes on. We see the less exciting but still interesting goings-on behind the scenes at the school – teachers debating punishment techniques and coffee machines, warning the new staff about the difficult classes – all shot in a documentarian, handheld style in amongst the desks.
The first half feels a little directionless, yet is still compelling, but the second, following the fallout of Marin saying two students behaved like “sluts” and his endeavours to help troublesome miscreant Souleymane, is much more on target. If you’ve ever been inclined to take up teaching, this film may infuriate you, with regards to how much effort Marin must fight against to even give Souleymane a chance.
Choose film 8/10