Veronica (Geena Davis) is a reporter for a science magazine, scoping out a party for up-and-coming scientists. There she meets Seth Brundle (Jeff Goldblum), an eccentric yet strangely charismatic guy who invites her back to his place to reveal an invention that will change the world as they know it. Upon arriving at his apartment, Veronica learns of Seth’s Telepods, devices that allow the user to instantaneously transport something from one place to another. At first they use an inanimate object, but the plan is to move living things, and then eventually Seth himself. Hilarity ensues.

END_OF_DOCUMENT_TOKEN_TO_BE_REPLACED 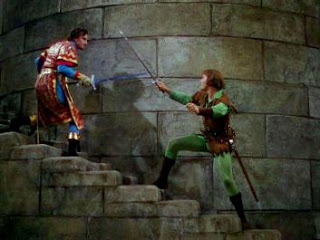 More and more it seems there’s no original ideas in mainstream Hollywood, but it turns out that this has always been the case, and it just seems more prevalent now because there’s so many more films released each week, and less original stories to go around, so therefore there’s more rehashed versions of films gone by available to us on a weekly basis. 2012 saw three remakes in the Box Office Top 20 (The Amazing Spider-Man, Snow White and the Huntsman, Les Miserables), and this is far from new, hell, even The Wizard of Oz was a remake back in 1939 of three silent films that came before it (and a book, but everything’s a remake of a book these days). The thing is though… I don’t mind. I have no problem with modern film makers updating older films to introduce them to a wider audience – there have been several instances where a remake has inspired me to go back and see the original, and I’ve discovered a classic that I otherwise may have never found (Scarface springs to mind).

So what inspired this list? Well, The Film Vituperatum‘s movie of the week is The Adventures of Robin Hood, which whilst I haven’t seen it yet and therefore haven’t got around to reviewing, I am more than familiar with the story, mainly due to the various adaptations of it. If I had to guess, I’d say the story of Robin Hood is probably one of the top three most adapted tales in history, after A Christmas Carol and Alice in Wonderland, but my list of top 10 Robin Hood adaptations would see Kevin Costner taking third place behind John Cleese in Time Bandits and an animated fox, at which point the list would end because I haven’t seen any others, so instead I’m going to celebrate the greatest remakes that I’ve ever seen, regardless of whether I’ve watched the originals or not. Oh, and The Wizard of Oz didn’t make the list, because I’m fairly sure I’ve never seen it all the way through. The list also doesn’t include any English-language remakes of originally foreign works, because that would be another list entirely, and one I’ll save for another day – perhaps when Ringu is selected for movie of the week?
END_OF_DOCUMENT_TOKEN_TO_BE_REPLACED