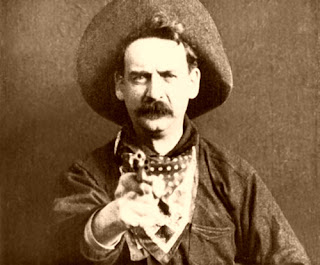 I had a productive lunch break at work today, managed to find The Great Train Robbery on Google Video. Although it was silent, juddery and of poor production quality, I was very impressed with what was capable of being produced 108 years ago, as the film involved explosives, gun fights, stunts on a moving train, a large crowd scene, horseriding, and a gun fight on horseback, all in the space of 12 minutes. That’s more action than a modern day Mike Leigh film. Some of the acting, especially when people were shot, was unintentionally hilarious, with their over-the-top melodramatic deaths. I was also unsure of the final shot, of a man looking into the camera and firing his gun several times. I thought it might have been a scare tactic, trying to emulate the supposed reaction to the first film ever shown in a cinema, Arrival of Train at Station, when apparently the audience were so concerned that the footage of a train arriving at a station was in fact a real train coming towards them that they fled the cinema in terror.
Choose film 7/10