Tom (Michael Douglas), a devoted husband and father, has spent years working his way up the corporate ladder at a technology company, and is expecting to be promoted as part of an upcoming merger. However, instead his boss Bob (Donald Sutherland) brings in new blood for the role, in the form of Tom’s ex-girlfriend Meredith (Demi Moore). Meredith summons Tom for a suspicious evening meeting accompanied by wine and shoulder massages, during which she attempts to seduce him. After initially reciprocating, Tom eventually turns her down and flees, telling no-one and hiding the scratches on his torso. Upon arriving at work the next day Tom discovers Meredith has vengefully accused him of sexual harassment, and Tom must either prove his innocence or be forced out of the company.

END_OF_DOCUMENT_TOKEN_TO_BE_REPLACED

Barry Levinson can’t work out whether he’s Oliver Stone or Jerry Zucker in this Vietnam-based Robin Williams vehicle. Heavy handed politics and imagery of riots, fire and explosions doesn’t tend to gel with zany antics and improv riffing from one of the world’s leading fast-talking funnymen, but fortunately Williams is on fine enough form to just about rescue the material from an uneven mess, as his radio DJ Adrian Cronauer is brought in to perk up the on-air talent of 1965 Saigon. The troops love him, but his superiors, including the late, great Bruno Kirby’s put upon aggressive peon Lt. Steve, are less keen on his refusal to play approved material and pre-programmed songs, opting for rock and roll over Perry Como. Some storylines seem forced and contrived – Cronauer repeatedly infiltrating an English class just to meet a girl, her entire family accompanying them on a date – and you get the feeling that this is only loosely based on a true story.
Where it shines though is the comedy. Though some of the references are now very dated and probably worked a lot better back in the States (Ethel Merman, Walter Cronkite, Mr. Ed), Williams knack for voices and repartee with a crowd is unparalleled, though a young Forest Whittaker as station lackey Edward Garlick gets his share of decent lines too: “A man does not refer to Pat Boone as a beautiful genius if things are alright.”
The film tries too hard to make a political statement where none is wanted, and the failed attempts at poignancy leave a bad taste in the mouth. Had the serious side been toned down – difficult, I know, given that it’s about war – and the directionless plot been reined in a little this could have been a classic.
Choose life 6/10
Overshadowed by the more successful, identically plotted yet inferior St. Elmo’s Fire for its starrier cast (back then anyway), this follows six friends as they joke, laugh, date and above all talk through their situations and lots in life as one of their number gears up to get married in a few days time. The cast of then near unknowns includes Steve Guttenberg, Daniel Stern, Mickey Rourke, Paul Reiser, Tim Daly, Kevin Bacon and Ellen Barkin, most of whom are fine in their roles, particularly Guttenberg as Eddie, the highly-strung groom-to-be who insists his fiancé must pass a football test or he’ll cancel the ceremony, and Stern’s Shrevie, the sensible, married member of the group who has discovered he has nothing to talk about with his wife (Barkin). Only Reiser is left without much of a character of story arc, left merely to pop up now and then with a well timed joke or put-down, something the comedian is more than equipped to do. Some of the dialogue seems to have been lifted from an unused Steven Seagal script (“I’ll hit you so hard I’ll kill your whole family”), but the 50’s soundtrack, featuring such artists as Bobby Darin, Jerry Lee Lewis and Chuck Berry help to make this an 80’s classic, even if it’s set in December 1959.
Choose film 6/10

Men in Black is a universally adored film, I think. But why is it so loved? What is the secret? Well MIB is that rarest of creatures, a film that is all things to all people. It is not simply a big budget summer blockbuster action movie, nor is it just an effects-driven sci-fi film, or a well crafted character piece, a buddy-cop movie or an offbeat bureaucratic comedy. It is all these things and more, telling the story of Agent J (Will Smith, now a fully fledged movie star after Bad Boys and Independence Day) a new recruit to the secretive Men in Black, an organisation tasked with managing the many alien lifeforms on Earth, without the knowledge of the general public. In true buddy movie form, J is partnered with Tommy Lee Jones’ grizzled yet laconic Agent K (who may well be too old for this shit), but I don’t remember Riggs and Murtaugh driving upside down in a tunnel, Tango and Cash delivering an alien squid baby or Turner and Hooch getting covered in slime – OK, bad example.
END_OF_DOCUMENT_TOKEN_TO_BE_REPLACED 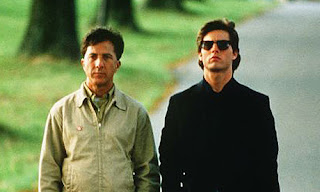 Rain Man usually, and justifiably, receives plaudits for Dustin Hoffman’s performance as the autistic Raymond Babbitt, a role for which Hoffman won his second Oscar (after Kramer vs. Kramer), but it is the performance of Charlie Babbitt by Tom Cruise that should receive accolades too. His Charlie is wound up a little too tightly by the wishes of his recently deceased father to leave his fortune to Charlie’s brother Raymond, a brother Charlie didn’t know he had. He’s angry at his father, angry at his brother, and everyone around him as he struggles to come to terms with the aftermath of his father’s death. I don’t mean to underrate Hoffman’s performance at all, his is the stronger of the two, and it is the little moments that make it so, such as the moment of childlike confusion on the escalator.