Tasked with defending settlers in 1879 Texas from attacking Apaches, Lt. Col. Kirby Yorke (Wayne) has an already difficult job complicated when his undermanned regiment is joined by a new recruit in the form of Yorke’s underage son Jeff (Jarman Jr.), whom the Lt. Col. hasn’t seen in a year. Hot on Jeff’s heels is his mother, and Yorke’s wife, Kathleen (O’Hara), eager to retrieve her son, but neither he nor his father is willing to allow that to happen. Elsewhere, an Apache attack on their fort and another enlisted man being wanted for manslaughter further add to Yorke’s plight. 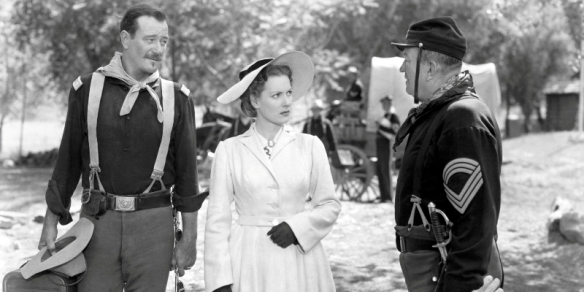 END_OF_DOCUMENT_TOKEN_TO_BE_REPLACED

Marlon Brando is Rio who, along with two companions, is forced to flee town after robbing a bank. One guy is gunned down, leaving just him and Dad Longworth (Karl Malden), and only one knackered out horse between them. Dad is sent with the loot to fetch fresh horses whilst Rio defends a ridge until his return, but Dad never comes back and Rio winds up in prison. 5 years later he escapes and has only one thing on his mind – to track down the guy who betrayed him all those years ago. The only problem is, Dad has spent his time wisely, going straight and settling down, becoming the sheriff of a small town, with a wife and step-daughter to care for. When Rio shows up with a new gang in tow and plans to rob Dad’s local bank, well things get a little messy for everyone. 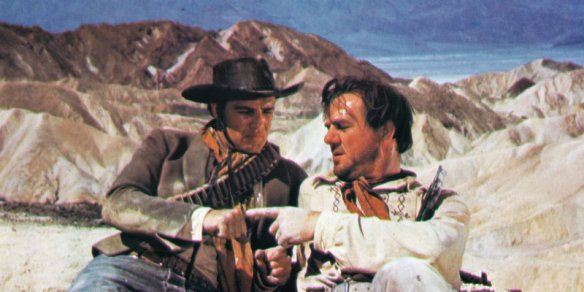 END_OF_DOCUMENT_TOKEN_TO_BE_REPLACED

In the old west, a gang of outlaws led by Pike Bishop (William Holden) attempt to pull one last job and rob a bank. However, things do not go according to plan (when do they ever?) and a bloody shootout ensues, during which some of Pike’s men are injured or killed, and the loot they obtain is found to be worthless. The guys set out to make another big score, but find themselves hampered by one of their former members, Deke Thornton (Robert Ryan) being forced to chase them down. END_OF_DOCUMENT_TOKEN_TO_BE_REPLACED