This is the final instalment of my three-part review of 2013. Part 1 can be read here, in which I complain about the fifteen worst new films I saw last year, and part 2 can be read here, where I talk about the twenty films in the middle of the pack. Today it’s on to the big guns – the best of the year. So sit back (but not so far back that you can’t read the screen) and enjoy what I believe are the best new films I saw from the past 12 months. END_OF_DOCUMENT_TOKEN_TO_BE_REPLACED

Bounty hunter Dr. King Schultz (Christoph Waltz) frees a slave called Django (Jamie Foxx), who has information on the Brittle Brothers, Schultz’s next targets. After Django helps him find them, Schultz agrees to train Django to work alongside him as a partner, with the intention of saving Django’s wife Broomhilda (Kerry Washington), from plantation owner Calvin Candie (Leonardo DiCaprio). But to save Broomhilda, the pair will also have to get past Candie’s ruthless housemaster Stephen (Samuel L. Jackson).
END_OF_DOCUMENT_TOKEN_TO_BE_REPLACED

Apologies for not posting this yesterday, we had an impromptu cinema trip to see Les Miserables during the time I’d anticipated sitting down and tapping this out.

2012 was a pretty good year for movies, and it looks like 2013 could be just as good, if not better. Here’s my pick of the films I’m looking forward to seeing most this year. There’s a few that have already been released in other countries, but haven’t made their way to England yet, but in my eye’s they still count as 2013’s films. 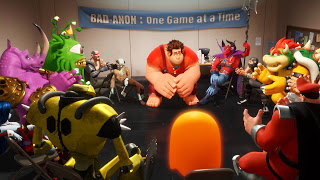 I’ve been looking forward to this film for a long time, because I do love animated films that are skewed firmly at adults. It hasn’t helped that Wreck-It Ralph has been out in America for over 2 months now, and that I’ve been hearing no end about it on The Adam Carolla Show, as he apparently voices a donut in the film. I’ve heard good things about it, but I think quite a lot of the references may go over my head, as I’ve never been a massive gamer, especially when it comes to the more classic arcade games. Anything related to Crash Bandicoot, Pac-Man, Sonic, Mario, Grand Theft Auto or Portal should be pretty clear to me, but I don’t recognise most of the villains in the picture over here. Hopefully there’ll be plenty to keep me amused though.
UK release: 8 February 2013
END_OF_DOCUMENT_TOKEN_TO_BE_REPLACED