This review was originally written as part of my USA Road Trip for French Toast Sunday.

A couple, Adam and Barbara Maitland (Alec Baldwin and Geena Davis) decide to spend their two weeks vacation at home working on their house, when quite unexpectedly they die in a car crash. They find themselves haunting their home and are tethered to it, unable to leave, and are appalled when new owners move in from New York, intent on renovating the house into a modern art spectacle. The Maitlands seem to have just one option – hire Beetlejuice (Michael Keaton), a self-confessed bio-exorcist, to help them rid their home of these unwanted inhabitants, but unfortunately he turns out to be a little more than they bargained for. 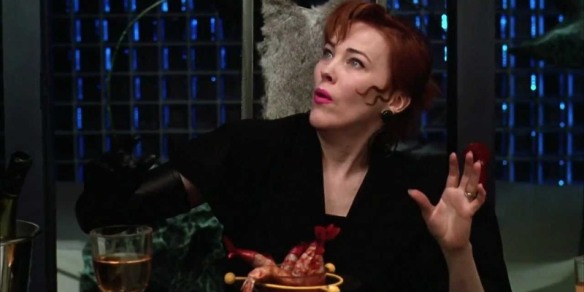 END_OF_DOCUMENT_TOKEN_TO_BE_REPLACED

This review was originally written for French Toast Sunday as part of my USA Road Trip feature.

How much of an introduction do I really need to give Ferris Bueller’s Day Off? I’m hoping none but, as much as it pains me to say, there’s probably a few unenlightened souls out there who have yet to discover the wonder that is this film. Ferris (Matthew Broderick) is an unimaginably popular and enterprising teenager who, one day, decides to pretend to be ill and skip school. It’s something he’s perfected into an art form – this is far from his first game of hookey – but this time he’s roping in his girlfriend Sloane (Mia Sara) and hypochondriac best friend Cameron (Alan Ruck). Once the gang has been assembled and Ferris has “borrowed” Cameron’s father’s prized Ferrari, the trio head to Chicago for the best day they’ll ever have. Meanwhile, Ferris’ sister Jeanie (Jennifer Grey) and the school’s Dean, Mr. Rooney (Jeffrey Jones) both suspect Ferris to be faking, and set about trying to bring him down.