Whilst guiding a team of fur trappers in the snowy North American wilderness of the 1820s, Hugh Glass (Leonardo DiCaprio) finds himself in a pretty poor state after being mauled by a bear whilst the group is fleeing a surprise attack from a Native American tribe they refer to as the Ree. Being unable to carry Glass back safely without endangering the rest of the team, captain of the party Andrew Henry (Domhnall Gleeson) requests Glass remain behind but be cared for and properly buried when the time comes. He leaves Glass under the protection of bitter, greedy trapper John Fitzgerald (Tom Hardy), naive and inexperienced Jim Bridger (Will Poulter) and Glass’ own half-Native American son Hawk (Forrest Goodluck). Circumstances arise that see Glass being abandoned with life still, barely, coursing through his veins, and he finds himself driven by vengeance against those responsible for abandoning him. 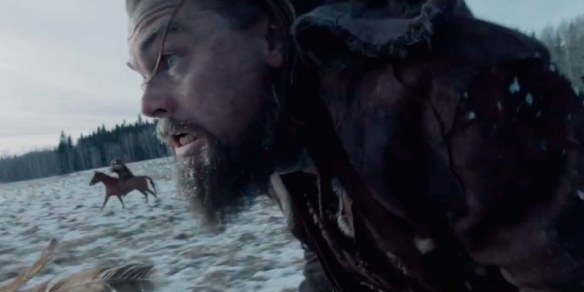