Celebrating the best film I’ve seen this week that’s not on the list, first up its The Muppets. I mentioned recently that I’ve not had a lot of dealings with the muppets in the past, and I now realise I’ve lived a previously unfulfilled life, devoid of a required amount of felt to maintain the desired level of happiness.
The cloth characters latest outing both improves upon and acknowledges those that have come before it (I’ve read that Muppets in Space and Muppet Treasure Island aren’t as good as The Muppet Movie or Muppet Christmas Carol, but I intend to find out soon) and like those other films the plot is kept nice and simple – Muppet superfan brothers Walter and Gary (co-writer and real-life Muppet super face Jason Segel) go on holiday to LA with Gary’s long term girlfriend Mary (Amy Adams), where they discover that wealthy oil baron Tex Richman (Chris Cooper) plans to buy and destroy the Muppet Theatre, giving the duo a few days to round up their disbanded heroes and raise $10 million. Just like its predecessors, the film is packed with mostly recognisable cameos, including Alan Arkin, Sarah Silverman and a very game Jack Black, and the soundtrack, including a moment where Chris Cooper quite unexpectedly raps (it’s not that bad actually) and the Oscar winning Man or Muppet is amazing, written by Flight of the Conchords Bret McKenzie, and I shall be purchasing it soon.
Improving upon the first movie by never spending too much time on one character, there are still a few flaws. Most irritatingly, a detail from the finale – Walter’s talent – is not mentioned throughout the entire film, and is pulled out of a hat at the end, and the first half, whilst good, is nowhere near as entertaining as the second, once the show the gang are putting on kicks off. Hopefully we won’t have to wait another 10 years before the next Muppet film, though if we do I’m sure it will be worth it.
Choose film 9/10 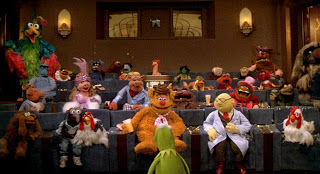 There are some days when I hate the list. The recent Luis Bunuel marathon? Whenever an Eisenstein film drops through my door? The 9-hour holocaust documentary? Those are all such days, none involving good times. But some days I get to watch a film where most of the characters are made of felt and have a hand shoved inside them somewhat further than recommended by most professional actors.

My only muppet experience to date has involved crossovers with Sesame Street, festive viewings of the Muppet Christmas Carol and the recent deluge of trailers for the muppets films currently in the cinemas, watch out on Monday for a new regular feature in which it will take centre stage. Yet though my involvement has been limited, I still adore them for reasons I cannot really explain, and this film details approximately how the team was formed.
Beginning with the muppets watching their own movie, the in-jokes and meta-humour grows throughout, with at one point characters finding one another because they read it in the script. Cameos come thick and fast, with each barely given a line, with the likes of James Coburn, Elliot Gould, Richard Pryor, Steve Martin, Mel Brooks, Telly Savalas and even Orson Welles showing up to join in the fun. I could have done with more time spent on the supporting characters – the Swedish Chef, Rizzo, Sam the Eagle, Statler and Waldorf and Dr. Bunsen Honeydew and Beaker, and a lot less time spent on Fozzie and Miss Piggy as I’ve always found them to be a tad annoying, but I suppose that’s just a personal preference.
Choose film 8/10