It’s that time of year again! As the new year looms ever closer on the horizon, here’s my ranking of every new release I saw in 2019. It wasn’t a banner year for new releases (I’ll go into more detail tomorrow), but I saw 54, which isn’t terrible. Here’s the ranking: END_OF_DOCUMENT_TOKEN_TO_BE_REPLACED

Alan Tudyk is 41 today, so let’s celebrated his birthday with his best five roles:

5. Jack (Knocked Up):
More of a cameo, Tudyk plays Jack, Alison’s (Katherin Heigl) boss at the TV studio where she works along with Kristen Wiig’s bitchy colleague Jill. Tudyk steals the scenes he’s in, insisting that, if Alison wants to be on camera, though he can’t legally ask her to lose weight, it would be nice if she looked a bit tighter.
END_OF_DOCUMENT_TOKEN_TO_BE_REPLACED 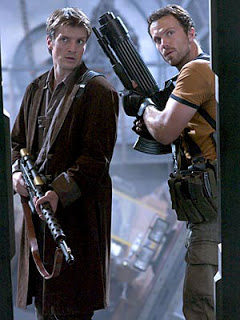 As I sit here in my Browncoats t-shirt, Firefly and Dollhouse boxsets worn and well loved on the shelf, it could be said that I’m a little biased about Serenity, Joss Whedon’s Firefly spinoff, created to tie up some of the loose threads after the incredibly popular and successful TV show was inexplicably cancelled after just one hugely entertaining series. Don’t be fooled, it’s not just another Star Trek, Battlestar or Farscape, Firefly is entirely its own creature, described more as a western, that just happens to be set largely in space, in the distant future after the Earth’s resources have been depleted and mankind has sought domicile elsewhere, ‘terra-forming’ other worlds to create habitable Earth-like planets.
All I can do is compare this to the TV show, but this is a mistake, and something I really don’t advise. The show had fourteen 45 minute episodes to introduce the characters and build on their relationships, steadily building a fan-base whilst taking the characters on various adventures and quests, whereas Serenity must introduce said characters, display and possibly develop their respective personalities and relationships, and also take them on some kind of journey, all within the space of a couple of hours, whilst covering as little familiar ground as possible, so as not to annoy the existing fans. It does this well enough, with an early extended steadi-cam shot establishing the members of the central crew-come-family, their individual characteristics, unusual manner of speech (“she is starting to damage my calm”) as they make their way around the good ship Serenity, even introducing new characters, like Chiwetel Eijofor’s nameless operative and David Krumholtz’s Mr. Universe, essentially a trial for the character of Topher in Dollhouse (and what is Inara but a doll herself?).  Some of the dialogue and mythology is a little thick for the uninitiated, but if anything it should pique their interest, enticing them to watch the show and embrace the culture.
Personally, after the events of Serenity, I’d rather they didn’t continue Firefly with any more series (although I don’t think there’s much danger of that) as certain characters are lost and conclusions reached that made the original show what it was. To find out exactly what I’m talking about, go forth and view at your pleasure, I guarantee you’ll find it shiny.
Choose film 8/10