This is not a remake, nor is it a sequel or prequel to Abel Ferrara’s Harvey Keitel-starring 1992 Bad Lieutenant, although there is one key similarity, in that the titular law enforcement officer is a corrupt drug addict attempting to solve a crime, in ’92 the rape of a nun, in Port of Call, the murder of a drug dealer, using their own, unconventional methods.
In this film, the drug-fuelled lead role is not so much played as inhabited, snorted, smoked and injected by a wired, tense and almost hunched Nicolas Cage, giving his best performance since Leaving Las Vegas, alongside a cast of largely unknowns or non-actors (including Xzibit as the drug kingpin lead subject of the investigation). As is traditional with maverick cop movies, there is more than just the case plaguing Cage’s Lt. Terence McDonagh, and at one point he must also juggle looking after his father’s dog, protecting a witness to the case, his friendship/relationship with Eva Mendes’ high class hooker/partner in narcotics and an investigation into his unorthodox interrogation of the witness’ grandmother, jeopardising the life of an elderly woman in her care. The very fact that McDonagh faces the repercussions of his actions sets this aside from other films in the genre, that so usually see their protagonists commit crimes in the name of justice with no consequences.
As amazingly intense as Cage’s performance is, the film itself never quite grips the attention. There is little here that hasn’t been seen before (other than hallucinations of iguanas and the break-dancing of a recently deceased hoodlum), but director Werner Herzog should be commended for rewriting the script to set the action in New Orleans in the aftermath of hurricane Katrina in order to provide the city with jobs and income.
Choose life 5/10 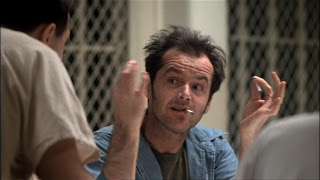 Jack Nicholson, in an arguably career best (so far) performance, is R.P. McMurphy, hopes to complete a short prison sentence without resorting to hard labour, and therefore pleads insanity and is transferred to a psychiatric hospital run by the steely Nurse Ratched (Louise Fletcher).  Ratched’s treatment methods, including humiliation and a mind-numbing daily routine appall McMurphy, as he realises the other patients are more focused on their fear of her than of functioning in the outside world. Although the main two performances are excellent, both winning well deserved Oscars, the film remains memorable more for the supporting cast that makes up the other inmates. Each has a specific and instantly recognisable personality, be it Brad Dourif’s stutteringly naive suicide risk Billy, Danny DeVito’s childlike Martini or Christopher Lloyd’s crazed loose cannon Taber, used whenever anyone is required to awake to a surprise situation, as Lloyd owns the greatest instant ‘what the Hell’ face on the planet.
The film is remarkable, not only for the acting but also the depths to which the story plunges, with an ending both horrific and genuinely surprising. Throughout the film it is obvious that McMurphy will be discovered as a fraud (something never actually stated during the film), and will of course be sent back to prison where he belongs (the sentence he is attempting to avoid is the statutory rape of a 15-year old girl), but the fate in store for him is far worse than could possibly be imagined. It also features possibly the most elaborate plan to have sex ever, hijacking a busload of patients, commandeering a boat and teaching said loons how to fish.
Choose film 9/10