In a nonsense dystopia where people are separated into groups based on their personalities, four people are on the run as fugitives from the state, after rebelling in the previous film. These people are Tris (Shailene Woodley), her love interest Four (Theo James), her brother Caleb (Ansel Engort) and a dick called Peter (Miles Teller). They’ve been hiding out amongst the forgiving and generally pleasant Amity faction, but when Peter sells out the others, Caleb heads back to his home in Erudite, leaving Tris and Four to go on the run, passing from faction to faction in an attempt to raise an army against the evil Erudite, led by Jeanine (Kate Winslet) and her army of Dauntless, led by Eric (Jai Courtney) and Max (Mekhi Phifer). 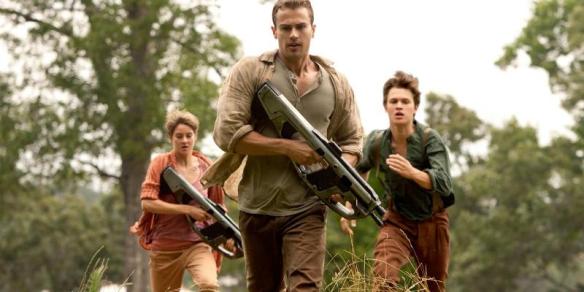 END_OF_DOCUMENT_TOKEN_TO_BE_REPLACED

In a dystopian, war-ravaged future, the only survivors live within a walled-in city, within which they are split into five groups, depending on their personality types, as defined in tests held when they reach sixteen years old. Tris and her brother, Caleb, have reached this pivotal moment in their lives. They grew up in the Abnegation faction – one devoted to helping others and whom also runs the government – but when Tris’ test results are inconclusive, she hides herself within Dauntless – the thrill-seeking soldier faction. You know what, this is stupid.

END_OF_DOCUMENT_TOKEN_TO_BE_REPLACED

This review was originally written for French Toast Sunday, as part of my USA Road Trip series.

When his wife suffers a boating accident and is thrown into a coma, wealthy land-owner Matt King (George Clooney) finds himself having to deal not only with his wife’s tragedy, but also their two daughters, an important land deal and some revelations about his wife’s life. END_OF_DOCUMENT_TOKEN_TO_BE_REPLACED

I’ve had The Descendants, currently the only Blu-Ray I own, sat on my shelf for a few weeks now, ever since I won it from the Empire Podcast, by answering a question about E.R., even though I’ve never seen a single episode. All praise IMDb. I’m something of a fan of Alexander Payne, and both Sideways and Election are just wonderful, so I’d been looking forward to sitting down and watching this, especially with all the Oscar buzz it had garnered earlier this year. The Descendants was nominated for five awards in all, including Best Picture, Director, Editing and Actor, and eventually won for Adapted Screenplay.
George Clooney, the aforementioned acting nominee, is Matt King, a wealthy landowner living in Hawaii,  and on the brink of a massive retail deal, in which his family’s historic heritage is to be sold, as requested by many of Matt’s less wealthy cousins. As if life weren’t stressful enough, Matt’s sporty wife Elizabeth (Patricia Hastie) suffers a horrific speedboat accident, leaving her in a coma, and Matt boosted from his former role as ‘back-up parent’ to the sole guardian of their two children, 10-year old Scottie (Amara Miller) and 17-year old Alexandra (Shailene Woodley), and soon becomes lumbered with Alexandra’s lunkheaded friend Sid (Nick Krause).
There’s a certain level of expectation for an Alexander Payne movie. The ones I’ve seen (not including Citizen Ruth or Inside Out 1 and 3) have all dealt with a story with dour aspects – be it failure, adultery, fraud, unhappiness or Kathy Bates’ backside – yet the sadness has been all but shrouded in comedy, yet here Payne’s reputable light touch is fighting against a brick wall of melancholy with the probable impending death of a spouse and mother. Such a morbid topic is no match for any level of wit, and the film almost always retains a depressing tone. This isn’t to say its a bad film, far from it in fact, its just that I was expecting a much more enjoyable watching experience that didn’t leave me deeply moved and my girlfriend literally in tears. 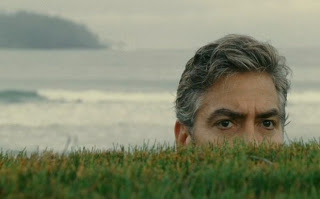 Payne made exactly the right casting decision in Clooney as Matt. The character is, let’s be honest, a bit of a dick. Yes, he’s a hard worker with a balanced head on his shoulders (he believes in giving his children enough money to do something, not so much that they’ll do nothing) yet he is practically absent when it comes to being a father and husband. Frequently away on business, he has little-to-no knowledge of his daughter’s lives, and it comes as no surprise to learn that prior to her accident, his wife was having an affair. It’d be a heartbreaking moment in most other actor’s hands, but Clooney breaks the tension with a ridiculously stone-faced flip-flop run. Under his command Matt is almost likable, and definitely relatable, even though he’s obscenely wealthy. Clooney is, in my opinion, a thoroughly under-rated comedic actor, and in one memorable scene (pictured) he has some genuinely hilarious eyebrows. Matt always seems to do the right thing and have the best of intentions at heart, yet his methodology and timing aren’t necessarily sound.
The revelatory performance of the film however is Shailene Woodley as Matt’s eldest daughter Alex, who lives on a different island to her father both literally and figuratively. Woodley is perfect in the role, her first in a film after appearing regularly on television since 1999, aged 8. Here she captures the exact transition from petulant teenager to woman-of-the-house, becoming a surrogate mother to her younger sister and a confidante to her father. Nick Krause is also great as Sid, a cliched dumbass who still gets to set up some of the film’s funniest moments. His first interaction with Matt’s father-in-law is just genius.
Beau Bridges and Judy Greer crop up in small roles, and Matthew Lillard does surprisingly well as a guy you really should hate deeply. The script has subtlety – offhand remarks to Elizabeth’s alcoholism and Alex’s drug taking – and definitely deserved at least the Oscar nomination, and whilst much of the action is fairly predictable, there are still a few unexpected turns along the way. This is still probably the least enjoyable of Payne’s films that I’ve seen – mostly due to the subject matter – but it’s still moving, well acted and performed, and all the locations are stunning.
Choose Film 8/10