In 1971, and following the deaths of her father and husband, Katharine Graham (Meryl Streep) found herself the de facto owner and publisher of The Washington Post, despite how little faith or respect her all-male team of advisers had for her. Meanwhile, the Post’s editor-in-chief, Ben Bradlee (Tom Hanks), fought to make the Post a relevant competitor to the more established national newspapers, and a lead on some illegally copied, highly classified government documents may be the key to making that happen. 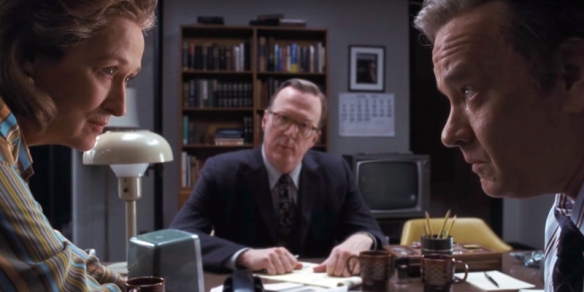 END_OF_DOCUMENT_TOKEN_TO_BE_REPLACED

Five college kids head for a vacation in a deserted shack (or cabin) in a remote forest (or woods), with no-one around for miles and a very creepy basement. So far, so Evil Dead. Or Texas Chainsaw Massacre. Or… well, you get the point, but the fact this is written and produced by Joss Whedon, and co-written and directed by Drew Goddard, one of the men behind Lost, should tell you that this is no ordinary textbook horror.
The recent years have seen the horror genre be evaluated, analysed and turned on its head, with the likes of Wes Craven’s Scream franchise and Tucker and Dale Vs Evil, and also imbued with a greater sense of comedy, for example Shaun of the Dead and Severance, to name two prime British examples. Cabin in the Woods takes these films and goes much further, leaving you rethinking every slasher movie you’ve ever seen.
I’m going to do my best to not reveal spoilers here, but if you’re trying to avoid them then chances are you probably aren’t reading this. The trailers have been criticised for perhaps showing more plot than is strictly necessary, revealing that there is more to this cabin than meets the eye, but I personally feel this is essential for the trailer (though it could have been hinted at more subtly) else the only trade the film would have made would be from the slasher fans willing to pay to see them at the cinema, of which I most certainly am not. My only trailer annoyance was the use of a scene or two from the third act that, though I’d only seen the trailers once, still stuck with me and left me waiting for them, over-thinking the plot as I went.

The performances are all wonderful, particularly practically unknown Tim De Zarn as the token redneck doomsayer the kids encounter on their way, and there’s some casting coups for fellow Whedon-ites in Dollhouse’s Amy Acker and Fran Kranz (whose Topher Brink is, occasional Firefly cameo aside, the best thing about Dollhouse) as well as Chris Hemsworth, Bradley Whitford and Richard Jenkins.
I have very few faults with the movie. One came because I’m a film nerd, and caught the signposted closing cameo from a recognisable voice, and the third act feels a little off the rails at times, but in an exhilarating, thoroughly entertaining way, although I did question why exactly that big red button was there. I look forward to pouring through the features when it’s released on DVD, and it’s the first film in a while that I’m actually considering going to the cinema and watching again. Go see this film, it’s truly wonderful, especially if you’ve ever seen a film with a cabin and some woods, and chances are you have.
Choose film 9/10