Richard Phillips (Tom Hanks) is the captain of the Maersk Alabama, a container ship heading around the Horn of Africa. En route they are set upon by four Somalian pirates, led by Muse (Barkhad Abdi). He and his cohorts are after money – more than the ship is carrying – and begin to search for the crew of the ship, who are hiding in the engine room whilst Phillips is held hostage on the bridge. END_OF_DOCUMENT_TOKEN_TO_BE_REPLACED

Charlie Kaufman has often been described as a breath of fresh air in Hollywood. The legend goes that there are twelve different stories in every film in Hollywood, and with his debut script Being John Malkovich, Kaufman wrote the thirteenth, and there’re so many ideas in Adaptation and Eternal Sunshine of the Spotless Mind that they probably count for numbers fourteen through twenty, and fortunately they’re all on the List. So after working on so many inspiring and imaginative modern classics, Kaufman’s directorial debut is a disappointingly convoluted tangle, as Philip Seymour Hoffman’s theatre director Caden Cotard struggles to create a play based on his own life, whilst struggling with a myriad of relationships and a mystery illness.

Whilst the entirety of the plot – also written by Kaufman – is positively brimming with ideas and ingenuity, from Caden seeing himself in cartoons and commercials, to a character living in a perpetually burning house, the lack of clarity between how much takes place in the real world, how much is in the obsessive director’s head and how much is part of the play is at best frustrating and at times infuriating. It doesn’t help that many of the actors look alike, possibly on purpose, with Michelle Williams, Samantha Morton and Emily Watson all used to play the same character in different levels of life, with the play being featured in the play, requiring Caden to cast himself, casting himself in the play of his own life. Time skips in the blink of an eye for us and for him – his four year old daughter with Catherine Keener’s bohemian artist ages seven years in a matter of days.

You get the feeling that the end result of the film is exactly what Kaufman set out to achieve, with every layer of obsession and confusion being carefully planned and perfectly executed, but when I tried to make some sense of it all, my brain started to run out of my ear. 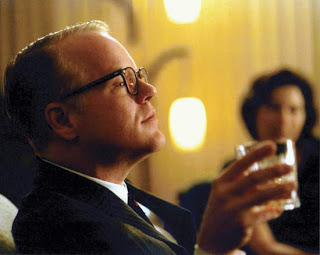 Philip Seymour Hoffman is a great actor, this cannot be questioned. Whether leading a small film in the likes of Synecdoche New York, Before the Devil Knows You’re Dead and the Savages, outshining the rest of an ensemble cast in Magnolia, Boogie Nights, the Boat that Rocked and the Talented Mr. Ripley or chewing the scenery as the bad guy in a big screen blockbuster like Mission Impossible 3, he always sinks completely into his characters, be they good-natured yet uncouth storm chasers, an intimidating phone-sex supervisor/mattress salesman or an outspoken rock journalist. With Hoffman’s acting ability in little doubt, it’s a wonder this film was made, as other than showcasing his talent for inhabiting the persona of another individual, there is little to recommend for this drab, largely plot-less offering .
Hoffman plays acclaimed writer Truman Capote (Breakfast at Tiffany’s), visiting a small town to document the aftermath of a murder for a magazine. Fascinated with the case, and even more so by one of the convicted killers, he expands his piece to become the last book he ever finished, In Cold Blood. The only real narrative drive is that of the court proceedings and Truman writing his book, interspersed with various parties and conversations with his friend Harper Lee (Catherine Keener) as she herself achieves publication and film adaptation of her own seminal novel To Kill A Mockingbird, but what the film lacks in purpose it makes up for in performances.
Choose life 5/10

Christopher McCandless (Emile Hirsch) has a very promising future ahead of him. Considering Harvard Law school after graduating from college, with a healthy savings fund and parents willing to buy him a new car, he’s set to make a name for himself in middle class middle America.
But alas, this is not the life he wishes to lead, refusing to make the same mistakes his parents made – marrying the high school sweetheart, living in an unhappy, abusive marriage for the sake of appearances – he gives his savings to charity, dumps his car, burns his ID and cash and changes his name to Alexander Supertramp, pledging to live life alone, “no watch, no maps, in the wild.”
Told through letters to his sister, accounts from those he met along the way and excerpts from his own diary, this true story, directed by Sean Penn, is at times joyous, tense and heartbreaking. There isn’t a weak link in the cast, but the standouts are easily William Hurt and Marcia Gay Harden as the confused parents left behind as their ideal son wanders for years with no communication, not even a letter goodbye.
Penn at times drifts too far into Terrence Malick territory (Malick previously directed Penn in the Thin Red Line), with elegiacal shots of admittedly beautiful scenery, poetic, philosophical pontificating and a meandering style, flitting between Alex’s journey across America and his time spent living in an abandoned ‘Magic’ bus he finds in Alaska, but the story and performances pull it through. You get the feeling the journey is exactly how Alex had hoped, finding the people he would have preferred knowing when growing up; the parental fellow travellers Jan and Rainey (Catherine Keener & Brian Dierker), girlfriend (Kristen Stewart), boss (Vince Vaughn), friends (the semi-nudist random Swedes) and kind hearted, lovably cantankerous grandfather (Hal Holbrook). The soundtrack is amazing too.
Choose film 8/10