In 1919 several young men develop and nurture a passion for running, and all aim to compete in the forthcoming Olympics in Paris in 1924. Amongst them are the Jewish Harold Abrahams (Ben Cross) and his friends at Cambridge (Nicholas Farrell, Nigel Havers) and a Scottish former rugby player turned Christian missionary Eric Liddell (Ian Charleson).

END_OF_DOCUMENT_TOKEN_TO_BE_REPLACED

Somewhere in the 20th Century, the world has become an Orwellian dystopia of farcical proportions. In a world where no mistakes are acknowledged, a random swatted fly falling into a typewriter causes a man named Buttle to be arrested in place of rogue terrorist heating engineer Harry Tuttle (Robert De Niro). Tasked with tying up the error’s loose ends is Sam Lowry (Jonathan Pryce), a menial yet essential worker within the Department of Records who his boss Mr. Kurtzmann (Ian Holm) would be lost without if he were ever promoted. Sam finds his quest to rectify the situation exacerbated by the likes of his plastic surgery-obsessed mother (Katherine Helmond), less than efficient government-employed heating technicians (Bob Hoskins & Derrick O’Connor), executive desk trinkets and his own dreams which see him flying around saving his literal dream girl (Kim Greist) from monstrous demons.

END_OF_DOCUMENT_TOKEN_TO_BE_REPLACED

Andrew Largeman (Zach Braff) is in a listless daze, working as a waiter/failed actor at a Vietnamese restaurant in Los Angeles when he receives a message from his father (Ian Holm) that his mother has died. Andrew returns home to New Jersey for the funeral, and ends up staying for a few days that will apparently change his life forever.

END_OF_DOCUMENT_TOKEN_TO_BE_REPLACED 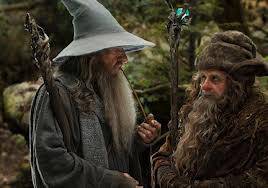 Bear with me here, this may sound a little strange. There’s these things called hobbits, which are basically people, but they’re quite a bit shorter than humans, with big hairy feet, and they live in the ground in houses with big round doors, and they have a penchant for pipes. One of these hobbits, Bilbo Baggins, is paid a visit by a wizard – stay with me – called Gandalf, who arranges for said hobbit to go on a quest with thirteen dwarfs – kind of like hobbits, but a little taller, bulkier, hairier and grumpier – to travel a really long way in order to break into a locked mountain and kill the giant dragon that’s sleeping on a huge pile of gold that rightfully belongs to the dwarves. Oh, and one of the dwarfs, Thorin (their king), chopped off the hand of a giant pale orc (a kind of, um, ogre?) after the orc (called Asok the Defiler, of course) killed Thorin’s grandfather, and understandably Asok is out for revenge. Oh, and there’s a mass of caves full of goblins, some giant wolf-creatures called Wargs, great big problem-solving eagles and another wizard called Radagast the Brown who keeps birds under his hat, their faeces in his hair and rides a sleigh pulled by big rabbits. Actually, now I think about it, there’s nothing all that weird about any of this.
END_OF_DOCUMENT_TOKEN_TO_BE_REPLACED

One of my favourite movie subgenres is the limited cast, limited locations films, where, for whatever reason, only a handful of characters are involved, and are confined to a small number, preferably one or two, of areas. This is best seen in 12 Angry Men, as previously discussed, where the principle cast are the 12 jurors on a case, and the principle sets are the jury room and its adjacent restroom. Similarly, Alien sees the seven crew members of the mining spaceship Nostromo largely confined to the ship and a planet it docks at in response to a distress signal. Things take a turn for the worse when, upon docking, the ship picks up an alien lifeform (later known as a Xenomorph), whose main ambition in life seems to be removing it from other creatures.
The film shows an interesting depiction of the future far removed from the more utopian worlds of more classic science fiction. Here, men seem to have retained dominance (shown by the exclusion of women from any decision making), and where class separation is still rife (the two engineers, Parker and Brett, are paid half as much as everyone else on board). The ship’s design is a far cry from the gleaming visuals of, say, 2001: A Space Odyssey. The Nostromo is, after all, a mining craft, so the ship’s functional, mechanical nature is only to be expected, although the overly futuristic sleeping pods do jar with the rest of the ship.

Aside from the infamous ‘chestburster’ scene (of which you can now by lifesize plush toys!), I couldn’t remember most of the film, although in my memory it does tend to blend with the other films from the franchise, as my only previous viewing was in marathon format. That said, there is much that sticks in the mind now, from Hurt’s descent into the alien nest, littered with giant eggs covered in a mysterious fog, or Ripley (Sigourney Weaver) seeing off an 8 ft alien with molecular acid for blood and far too many sets of teeth dressed only in vest and knickers (Ripley’s wearing the knickers, not the alien).
Having seen many survival films, where the cast is slowly whittled down one by one until the final confrontation, I noticed that with Alien it is not immediately obvious who the main character, and therefore the final survivor, is. Most of the characters are given fairly equal screen time, characterisation and dialogue, so it is not until the numbers start to dwindle that it is clear Ripley is the heroine, as earlier in the film she seemed to be the more heartless, professional crewmember, condemning Hurt’s Kane to death by refusing him entry onto the ship without a proper scan. That being said, she does become stupid later on, stopping to put two suffering crewmembers out of their misery minutes before the entire ship, them included, will be blown up (I’ve never understood this, why do ships have self-destruct mechanisms? Were they expecting an alien lifeform to come aboard, and the only way to kill it would be to blow the whole ship up? If so, surely some other defence mechanisms could be implemented instead?), and then she goes back for the cat, kept on board purely to jump out at random moments to scare the bejesus out of anyone in the vicinity.
Choose film 9/10