Last week was spiders, this week we celebrate that other great scary creature – snakes! I know I got some negative feedback from scaring people with the spider pictures – sorry Dylan, you big pansy – and that’s unlikely to change this week, especially because my girlfriend is frankly terrified of snakes, so sorry about that honey, but it is October, after all.

I’ve got no problem with snakes, but then again I’ve never actually encountered one that isn’t trapped in a perspex box, apart from the one an obnoxious twat was parading round a shopping centre near me recently, deliberately trying to scare people and using the snake as a clear replacement for the lack of any other reason people would have to notice or talk to him. But it would seem they show up an awful lot in films. This is probably because, similarly to spiders, they have completely the wrong number of legs for any normal animal, yet still manage to function effectively. How much fear do you think you’d strike into the heart of small children without any limbs? Not a great deal, probably, but that’s because you’d probably have an awful lot of trouble moving around unaided, whereas snakes get along just fine. It’s impressive, really. 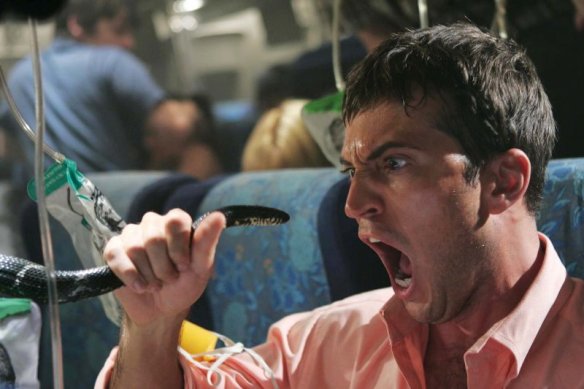 So, the obvious answer everyone’s shouting is Snakes On A Plane, to which I say yes, it’s a great film, but no, it’s not on the list, because of the same reason I ignored Eight Legged Freaks and Arachnophobia last week – it’s just lousy with snakes. There’s too many for any to stand out, so they all suffer because of it. And as much as I wanted to, I couldn’t quite bring myself to include Monty Python, nor did I allow  Lt. ‘Cobra’ Cobretti on, mainly because I haven’t seen Cobra. And I was tempted to include Mark Wahlberg’s appendage in Boogie Nights, but decided against it at the last minute. There is one questionable not-really-a-snake inclusion, but there’s no way he could be omitted. Anyway, enough preamble, here’s the list: END_OF_DOCUMENT_TOKEN_TO_BE_REPLACED

Today I’m going to see Dirty Dancing at the Mayflower in Southampton. Not my idea, long story. The previous musicals I’ve seen have all either been of films I either love (The Lion King) or at least enjoy (Chicago, film review will be along shortly), or heavily feature music by an artist I’m a big fan of (We Will Rock You), but Dirty Dancing ticks none of these boxes, in fact it’s based on a fairly terrible movie. So I got to thinking, what movies should be made into musicals? The other adaptations out there do not interest me at all (Sister Act, Billy Elliot, Shrek, Ghost, Legally Fucking Blonde). There’s a couple I probably should have seen by now (Spamalot) but for one reason or another haven’t gotten around to, but I think if any of these came to my local theatre, I’d be a little more tempted.
END_OF_DOCUMENT_TOKEN_TO_BE_REPLACED